Trainer Donna Scott prefers to look at all the positives surrounding the promising Oakmanikka rather than the one negative ahead of Saturday’s SDRA Newhaven Park Country Championships Qualifier (1400m) at Wagga. 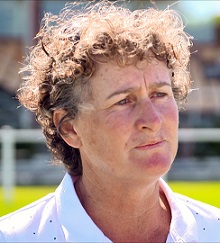 Trainer Donna Scott has four runners in the Country Championships Qualifier at Wagga.

That negative is of course barrier 14 but as Scott looks at the race as a whole she said she wouldn’t change too much in order to give each of her four runners their chance in the $150,000 feature.

The Albury trainer is also represented by the in-form Halo Warrior, drawn four, Gottaluvtrucks (7) and Bautista (11).

“I’d prefer Halo to draw where he did, with Oamanikka it is what it is,’’ she said.

“We have the in-form jockey of NSW (Blaike McDougall), you’d think there is pace in it and he just needs to find a back. He’s not a sit and sprint horse.

“We’ve been wanting to put the blinkers on for a while. I don’t like to do it too early and we’ve been holding off for the grand final.

“He’s always indicated he was a horse that wanted them on and it seems to have worked in ideal.”

Of course Scott has been to the past three $500,000 Newhaven Park Country Championships Final at Randwick with Bennelong Dancer, who ran third in the 2019 Final, so is well aware what it takes.

Oamanikka ($4.40 with TAB and $26 in the all-in Final market) has missed a place once in nine starts and showed Scott he’s on target with an unlucky second at Moonee Valley on February 5.

“He needed to go to the races, we thought we’d throw him in down there,’’ Scott said.

“From working with Peter Snowden when I was in Sydney, a trip away never hurts horses so we thought we’d go down there and give him a look about.

“It worked out perfectly and filled us with confidence that he can go into this race and be amongst them.”

Halo Warrior has also won four from nine and he ran out a popular winner of the Country Championships Preview (1400m) at Albury two weeks ago and at $13 Scott believes he’s underestimated.

“Drawing that gate it brings him more into the race. I wouldn’t have liked to see him draw 14,’’ she said.

“He’s a horse that wants to be in the first half of field, I would have been dirty if they drew the other way.

“I have a lot of time for the horse, I think he is definitely improving with every start.”

Interestingly, she rates Gottaluvtrucks (a $101 chance) ahead of Bautista ($26) given the latter’s best form has been in the wet and those conditions aren’t going to present at Wagga.

Gottaluvtrucks carried 64kg to win at Albury on Boxing Day and has been kept fresh since running fifth at Albury two weeks later over a mile while Bautista hasn’t raced since finishing fifth as favourite behind Mnementh at Albury in November.

“We thought we might have been a bit low on the rating side with them but they’ve got in,’’ she said.

“Ideally Bautista loves a bit of give in the track, it would have brought them back to him if it was a bit wet. The others probably have a bit more form on the board than him.

“It was a non TAB that Gottaluvtrucks won but he carried a lot of weight over 1400m, I said to the owners we are qualified so we might a well give him a crack. I think he is a rough chance.”

All the fields, form and replays for Saturday's Country Championships meeting at Wagga

By Brad Gray Tips and race by race preview by Brad Gray for Randwick. The rail is in the 3m ...
Read More

Drug Detection Dog Bear's On The Hunt For Racing NSW