By Julieanne Horsman at Muswellbrook Racecourse

He’s been the favourite for the $500,000 Newhaven Park Country Championships Final since the series started but it wasn’t until this afternoon Noble Boy actually qualified for the race. The $50,000 Wild Card at Muswellbrook Race Club provided the best horses who had missed out on qualifying in their regional heat one last chance to earn a start in the final and Noble Boy (Hugh Bowman) and Safe Landing (Sam Clipperton) got the job done.

While Clipperton took Safe Landing forward, Noble Boy gave them a fair start but began picking them up as he rounded the home turn. Safe Landing gave a good kick with 200m to go but Noble Boy managed to run him down and win by one-and-half lengths.

“It’s heart in mouth stuff,” young Queanbeyan trainer Todd Blowes said. “I think I’m more relieved than anything because all the markets suggested he should win. He was tough to the line and will be spot on for 13 days time.” 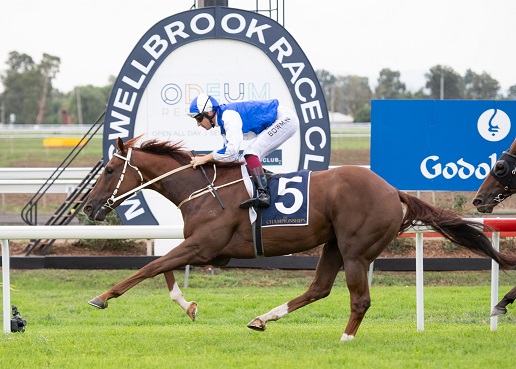 Hugh Bowman, who has never been beaten on Noble Boy, made the trip up to Muswellbrook Race Club especially for the ride after a huge day at the Golden Slipper.

“He really enjoyed the conditions (heavy 8) and I’d be hoping for a bit of rain come Country Championships time,” Bowman said. “At this stage I am feeling pretty confident about the final.”

After finishing fourth with a luckless but gutsy run on firmer ground in the South Eastern Regional Qualifier at Goulburn, Blowes wasn’t leaving anything chance this time. He took Noble Boy up to Muswellbrook on Wednesday night to allow him to get comfortable with his surroundings.

“I can’t thank Muswellbrook Race Club enough, Duane, the Dobies for stabling the horse, they’ve all been a fantastic help and it’s been absolutely marvellous.”

Safe Landing was game in defeat and trainer Kurt Goldman was pleased his plan for the horse came off.

“I wanted Sam (Clipperton) to roll to the front and I think we just ran into a really smart horse,” he said. “I’m very happy with my horse and he came back from that Goulburn run and did exactly what I thought I could today.

“Sam had a lot of faith in this horse and I have to thank him for coming out today. He said he wasn’t entirely comfortable on the track today so back to a softer track, which we could get at Randwick, and a step up to 1400m should suit him. It’s an exciting time.”

Watch replays from all nine races at Muswellbrook today here.