The track is a Good 4 with the rail out 4m from the 1400m to the winning post; in True position the remainder. 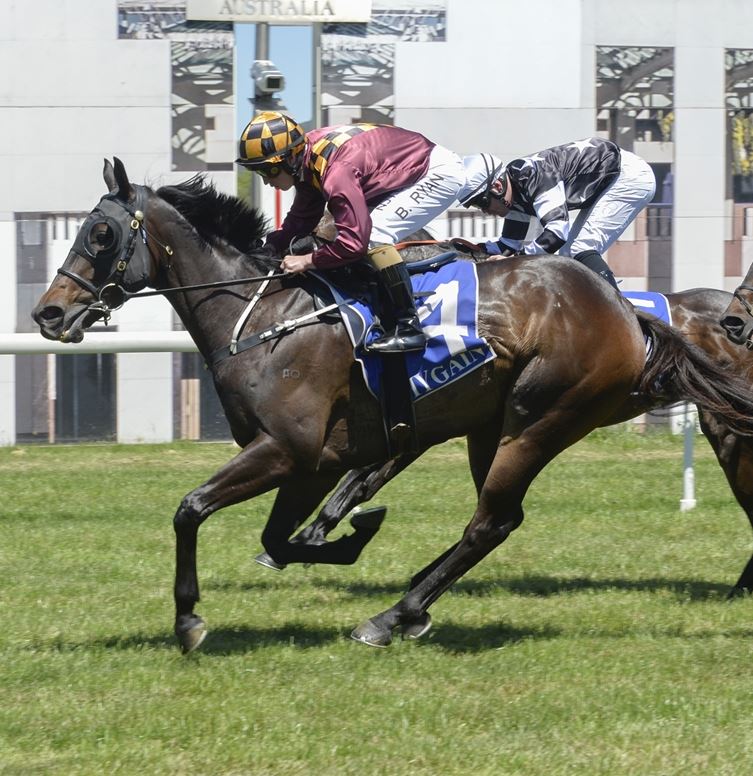 Finally back on a firmer surface although still a little lead-up rain. Like Canberra five-year-old 3. Francisco Pizaro ($3.60 on TAB - pictured left) who has been kept clear of wet tracks since working home from a mile back at Nowra in a BM 58 early last month. Had previously charged home to win a Class 1, and step up to the mile looks ideal. Given an easy trial last week.

Dangers: Improving four-year-old 1. Prince Aurelius ($2.60 fav) led all the way third-up at Moruya and will again take some catching carrying 3kg less after the claim. They rediscovered the secret to four-year-old 4. Decker ($4.80) at Albury last month, bouncing to the front and running the opposition off its legs. Pure dry tracker who has also been held back for an improving surface.

How to play it: Francisco Pizaro to win
Odds and Evens: Odds

The maiden boys lock horns and this looks ripe for three-year-old 8. Gave Me You ($1.33 fav) who has worked home okay in three deeper maidens at home and desperate for the longer journey.

How to play it: Gave Me You to win
Odds and Evens: Split

Several chances in this one headed by perennial and often luckless placegetter 2. Jodhpur ($5.50) who resumes off a seven-month absence. Despite finding ways to go under last prep, has only missed a place here once in 10 starts and is a dominant first-up performer.

Dangers: Progressive Albury mare 5. Bellarina Magic ($7) has been hitting the line from well back and can peak here fifth-up over this longer trip. Canberra filly 4. Distillate ($2.60 fav) has used her tactical speed to record consecutive country wins from the front and again will look to cross and dictate. Up in trip, though, and the top jockey gets off. Include Albury three-year-old 1. Branders Rule ($4.60) who resumes as a gelding off a handy trial, while consistent mare 3. Micks New Chick ($5) has been close-up in her last couple on the South Coast and isn't far off another win.

Very tricky race. Improving Canberra colt 2. Arcadia Power ($5) is well over the odds after chasing home the smart and dominant One Aye here last start and this looks a nice peak distance fourth-up.

Dangers: Local mare 7. Beau Belle ($3.90 fav) drops back to maiden grade after finishing close-up in three runs this prep and gets a soft run from the draw. Another Canberra three-year-old 3. Party All Night ($8.50) will need some early luck to slot in from a wide gate, but finished okay in two runs to start her career and extra distance is a plus. Big watch on Wodonga five-year-old 12. Magic Murphy ($4.80) who improved sharply second-up getting on to a firmer surface and draws the inside.

How to play it: Arcadia Power each way
Odds and Evens: Split

Big field here with plenty of chances. Home track filly 7. Carnival Miss ($6.50) was very well backed on debut and made up late ground after drifting too far back. Blinkers have been added and a natural improver up in trip.

Dangers: Ex-Qld filly 11. Magic Amelia ($2.90 fav) resumes in her first run for a new local stable. Draws to get a nice trail and significant gear changes have been made. Canberra mare 4. Stand Your Ground ($7) made up even more ground from the back in that same maiden as the top selection and equally suited by the rise in distance, but will again be forced a long way back from the wide barrier.

How to play it: Carnival Miss each way
Odds and Evens: Odds

Another wide-open heat of the Wagga Stayers Series. Goulburn mare 4. Zarafah ($3.10 fav) has only one win ahead of her 18th start but has run a stack of placings in better company. Got home impressively in Highway grade two runs back before an even effort over further at Goulburn.

Dangers: Albury five-year-old 2. Sydney Blue ($4.20) ran four straight second placings around this region before stepping back up in grade at Canberra and holding his own. Long overdue to win a second race, but up in weight and drawn off the track. Include local mare 6. Mahsinger ($4.60) who will find this easier than her last couple and gets in light after a 4kg claim.

How to play it: Zarafah to win
Odds and Evens: Evens

Good depth for this grade with a stack of chances. Improving home track mare 5. Torsiton ($4 fav) is ready to win again back a little in trip. Has been on and around the mark since bolting in her maiden five runs back and preferably can be ridden a little quieter here and charge over the top.

Dangers: Kembla four-year-old 3. Alan ($7) stamped his trial form with a first-up win at the Sapphire Coast. Draws okay over a little more ground and should be prominent on-speed again. Improving stallion 1. Mandalong Nicko ($5) has been strong through the line at Canberra in two runs back but will need the breaks from a wide draw under a big weight. Hard to catch mare and back-marker 7. Earp ($7) drops back from tougher Highway grade and has the finishing ability to win with blinkers going on. Big concern is how much traffic she has to negotiate from the inside barrier. Albury four-year-old 2. Shadow Company ($7) was close-up in two runs at home before only average in a deeper Class 1 at Canberra. Blinkers come off again and hard fit, but will need a cosy run to win this. Canberra mare 10. All About Me ($11) hit the line well at home and is ready for a return to this longer journey.

We cap the meeting with a wide-open feature handicap sprint and there should be plenty of speed on. Canberra mare 5. Rockarosa ($8.50) can strike second-up from a soft draw after working home nicely in the Xmas Cup at Moruya which looks a strong form race.

Dangers: Short-course eight-year-old 1. Stephan ($9.50) keeps improving, finishing hard in a stronger BM 82 at home last start. Best on firm ground and gets another chance to break his distance hoodoo having never run a place over 1200m. Include another Canberra seven-year-old 6. Kanerupt ($8) who was also close-up in that Xmas Cup and drops a hefty 6kg from a strong closing run in a BM 70 Federal at home. Improving Albury four-year-old 7. Scout ($3.40 fav) has found the line well enough in two runs back, although a tricky assignment from the gate. Corowa mare 3. Magnavale ($8.50) resumes without a public trial, but she comes to hand quickly and has a smart fresh record, while include in wider exotics 10. Chipsaredown ($4.60) who drops 5kg from being outclassed in a BM 70 at Flemington.

How to play it: Rockarosa each way and box trifecta 1,5,6,7
Odds and Evens: Odds