The track is a Good 4 with the rail in the True position.

We open a smaller card with an even staying battle. Like the fact improving mare 4. Zizania ($2.40 on TAB) backs up in five days after doing her best work late in heavy ground at Muswellbrook behind an in-form galloper.

Dangers: Tamworth mare 1. Autumn Rain ($4.20) is ready to win again, coming back a little in trip off a fighting effort at Tuncurry. Typically given time between runs and leading jockey sticks. Tough five-year-old 5. Luck In Running ($3.90) is looking for this trip now after working home late in a Class 2 at Gilgandra, while 6. Do It ($5.50) steps up sharply in distance and should get a cosy run off the speed with cover. 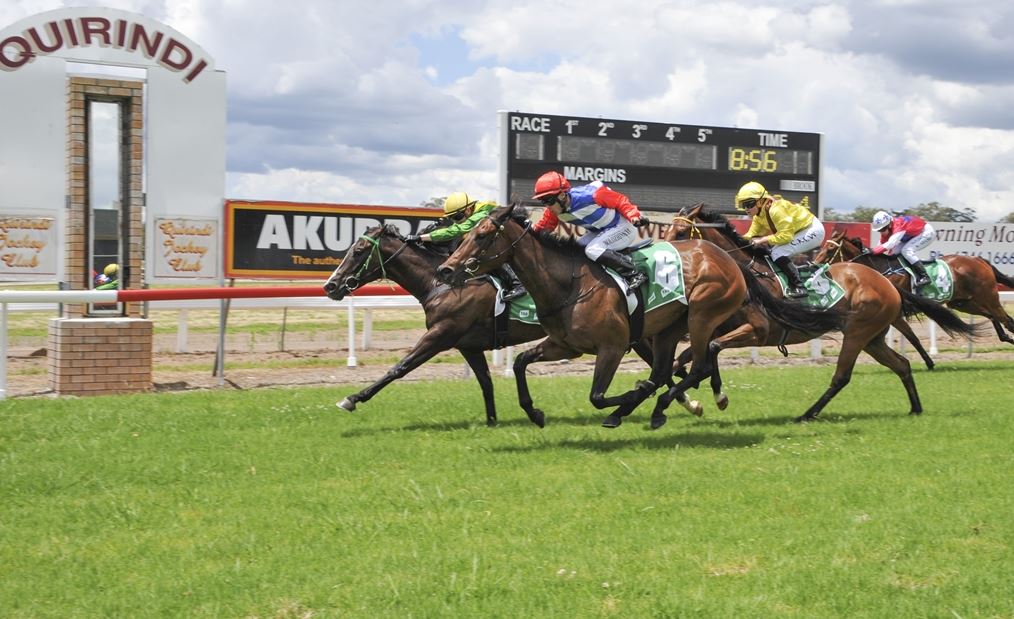 Scone filly 9. Little White Lies ($1.70 fav) looks hard to beat dropping back from a bold front-running effort at Canterbury. Looks beautifully treated at the weights and can break through third-up on a made-to-measure tighter track.

Dangers: Newcastle filly 10. Only Need Time ($6.50) can strike at her third start after finishing okay in a much deeper maiden and will appreciate getting back on a drier surface. There's a gap to the rest headed by 4. Sea Boss ($5) who resumes off two progressive trials and Tamworth-based ex-Victorian 3. Royal Confession ($8.50) who is having first run for new strong stable with blinkers coming off.

Good race with plenty of chances. Keen on Newcastle five-year-old 1. Continuation ($3.90) resuming. Looks fit for this trip having trialled twice up to 1200m and gets in okay at the weights after the claim.

Dangers: Consistent seven-year-old 3. Allez Rev ($7) has never raced better winning two straight in and around this level before working home okay in a Class 4 at Gosford. Will find this a bit easier, but does shoot up sharply in the weights. Been a while since 5. Salsa Man ($8) has saluted, but did his best work late resuming in that same provincial Class 4 and can peak over this distance second-up. Improving four-year-old 5. Danebrook ($2.60 fav) wasn't beaten far resuming at Inverell after leading and winkers come off. A query second-up at this trip, but draws to get a good run and an experienced rider takes over.

How to play it: Continuation to win and box trifecta 1,3,4,5
Odds and Evens: Odds

Back to the maidens over the same distance. Improving four-year-old 1. Anarzali ($3.80) can break through at his third start after two competitive runs. Suited by more ground.

Dangers: Mare 8. Currency Queen ($5) has shown gradual improvement in three runs to start her career and will enjoy getting back on firm ground.

How to play it: Anarzali to win
Odds and Evens: Odds

Progressive three-year-old 2. Without Shame ($1.85 fav) can bounce back here fourth-up from a soft draw. Swept home for a dominant maiden win at Mudgee before a bit stiff working home into a place against the bias at Inverell. Can park midfield with all the cover he needs.

Dangers: Improving mare 5. Classic Gown ($6) is a threat down in weight after surging home to claim her maiden in heavy ground at Taree when fourth-up. Consistent three-year-old 4. Theo Legion ($3.80) stuck on well in a strong Class 1 at Scone in heavy going, and can utilise his early speed from the inside gate. Ex-SA five-year-old 3. Done Good ($7) resumes with no public trial, but hit the line nicely in two runs for new provincial stable before being spelled.

How to play it: Without Shame to win and box exacta 2,4,5
Odds and Evens: Split

Newcastle mare 9. Dream Song ($2.40 fav) draws to get the right sort of trail resuming off two trials. Comes to hand quickly, and this an ideal return race.

Dangers: Plenty of them headed by Scone filly 10. Baiyka ($3.60) who hung on to beat a handy maiden field two runs back before finishing okay in heavy ground at home. More effective when she goes forward and suited around this course. Flying mare 5. Owhat A Crumpet ($5.50) won two straight before overhauled late in the heavy at Taree. Has the speed to overcome a wide draw, but will need to steal a break on them over this extra journey. Include seven-year-old 1. Achi Baba ($8) who resumes under a big weight with no public trials, but two of his four career wins have come fresh, while resuming six-year-old 2. The Outcast ($9.50) is not a noted fresh performer, but did win a recent soft track trial by more than 10 lengths.

How to play it: Dream Song to win
Odds and Evens: Split