Track is a Good 4 with the rail in the True position for Country Showcase Cup day.

Like the three-year-old Qld visitor 9. Koonunga Hill ($2.60 favourite on TAB) who comes back in trip off a decent freshen-up. Has been attacking the line all prep and can park around midfield here from a soft draw, and be the strongest late.

Dangers: Improving four-year-old 4. Hogan's Dare ($4.20) is ready to win third-up. Has attacked the line at home in two runs back from a spell and from a better draw off a genuine speed, can run home hard. Stable-hopping six-year-old 1. All Too Natural ($8.50) has had one moderate run for new Coffs stable in deeper company and can improve sharply here, while three-year-old 11. Valletta Knight ($4.40) is well placed at the weights after a 3kg claim, and can peak fourth-up.

How to play it: Koonunga Hill to win
Odds and Evens: Split 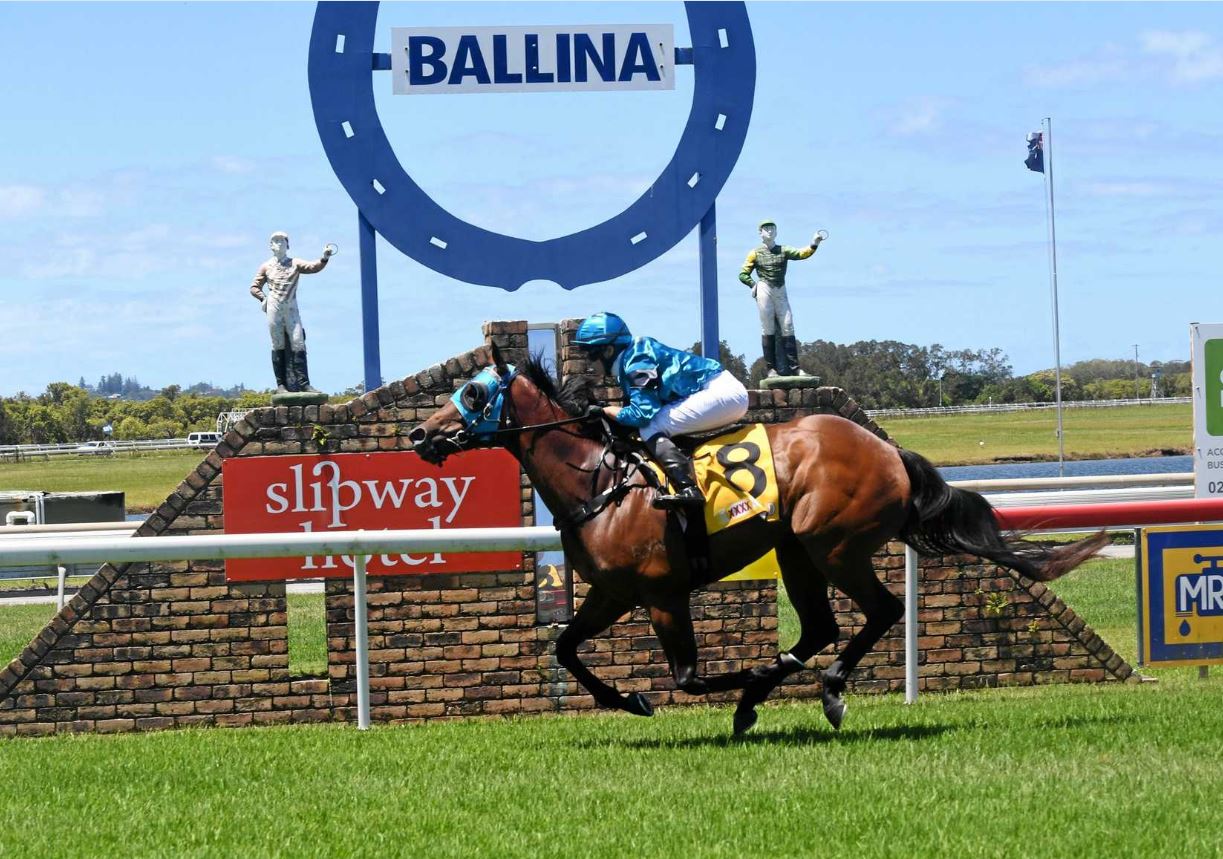 Stack of chances here in a very tough maiden. Lightly raced Grafton four-year-old 4. Rock Odyssey ($13) has had two runs back from a spell. Struggled in the heavy at Lismore last start but much better served back on firm ground where he can box seat right behind the speed at big odds.

Dangers: Local filly 11. Lasting Kiss ($2.80 fav) held her ground okay on debut here and can make enough improvement to be in the finish. Nicely bred 6. Dubai Eagle ($17) missed by a whisker second-up here in soft ground. The wide draw has done resuming filly 9. La Roca ($10) no favours, but her trainer has made gear changes and she did go close on debut on a firm track. Another three-year-old 5. Arewerichenuff ($31) has trialled well ahead of his return but also drawn off the course, while 12. Let Us Loose ($11) can also improve sharply back on firm ground at her second start.

Doesn't get much easier here, although debutant Qld three-year-old 2. Twelve Apostles ($4.40) has been brought along gradually at the trials and drawn to get a soft run.

Dangers: Coffs three-year-old 7. Full Press ($3.30 fav) resumes with no public trials but was competitive in better maidens last prep and also drawn to get a cosy run. Keep safe stablemate to top selection 12. Missy Em ($8) who ran according to her market drift on debut, but fitter now and draws well.

How to play it: Twelve Apostles to win
Odds and Evens: Split

Back to the short course and promising Coffs three-year-old 3. Parksville ($2.10 fav) can win again despite a very tricky draw. After a solid metro debut over the border, treated his rivals with contempt in winning by four lengths and still under a hold. Obviously more depth here but he only needs to slot in with some cover to be hard to beat.

Dangers: Keep safe 2. My Cousin James ($14) who resumes on his home track from the inside gate. Bolted in on debut here in winter but this is his first time on a firm surface.

How to play it: Parksville to win
Odds and Evens: Split

Good competitive race for this grade with plenty of hopes. Progressive Qld three-year-old 9. Beckford ($4) stretches out to this trip at the right time after finishing best to win his last two. Well in at the weights despite a slight rise in grade and can get home hard off a decent tempo.

Dangers: Gold Coast mare 2. Predictable Miss ($2.90 fav) has won two of her last three and certainly fit enough for the step out to this journey. Swept home to beat a good Class 2 field at Coffs three runs back before taking care of a weaker field at Kilcoy. Not totally convinced the inside draw is her go, but she'll get a lovely trail and just needs clear air from the 400m. Include five-year-old 8. Saintly Sunrise ($14) who drops in weight fourth-up. Much-improved 6. Wamwarra Bay ($4.40) has never raced better winning his last two up to this level, but taking on some smarter ones here, and drawn off the track, while 3. Bullet Shot ($14) is suited back on firm ground.

Those around the top of the weights can fight this out. Progressive Toowoomba four-year-old 2. Avowal ($2.60 fav) is right at his peak fifth run in for a stable that regularly strikes when it crosses the border. Bolted in a Class 1 at the Sunny Coast three runs back and was close-up in a recent metro Class 2 when very well supported.

Dangers: Tough Coffs 4YO 1. Baileys ($5.50) was very good leading first-up in a deeper race at Tuncurry and carries weight well, although is nearly six weeks between runs, while four-year-old stablemate 3. Alcides ($6) is shooting for three straight in a tougher race, but drops 4kg after the rider's full claim. Lightly raced Murwillumbah mare 5. Triple The Fun ($7) is also a strong chance fourth-up off a close second at Ipswich and especially getting back on top of the ground.

Feature race of the day is typically a wide-open battle. Like the value about 5YO Qld gelding 9. Wild Moon ($8) who has won two of his last four. Tracked the speed and let down for a dominant BM 65 win at Ipswich and carries 3.5kg less here.

Dangers: Gold Coast four-year-old 2. Sea Raider ($4.20 fav) comes in with superior Eagle Farm form having finished best to claim a Class 5 before brave under 60kg in a tougher BM 75. Hard fit for the trip and only has to reproduce those runs, but wide draw on a tighter track is a query. Lightly raced seven-year-old 4. Penshurst ($4.80) got under the market's guard sweeping home to win a BM 80 resuming, but second-up form is not as sharp. Include Gold Coast mare 10. Ivy's Dream ($21) who is hard fit and four of her six career wins have come at this track, while 8. Lord Heron ($6) fought on okay after leading in a Highway and has been kept fresher, and 12. Malawi Gold ($6.50) gets an economical run from the draw fourth-up.

How to play it: Wild Moon each-way
Odds and Evens: Split

Few chances in the closing sprint too. Keen at the big value on Victorian mare 1. Beautiful Bee ($10) who just missed first run this district after travelling up off a solid Moonee Valley campaign against tougher opposition. Claim helps off-set the big weight and draws to park just off the speed and pounce over the final furlong.

Dangers: Qld four-year-old 3. Kaoru King ($3.10 fav) has won his last two and keeps improving, although shoots back up in weight, while local four-year-old 4. Jet A One ($8) led all the way here last start in similar grade, but up in weight and drawn off the track.

How to play it: Beautiful Bee each-way
Odds and Evens: Odds