She may have been relatively late to racing but four-year-old Goulburn-trained mare Designer Dance ($4.80 on TAB fixed odds) is finding her groove in quick time.

A product of Emma & Lucy Longmire's Twinstar training operation at Goulburn, Designer Dance has hit the ground running at her first campaign.

The mare has had two starts to date, both at Wagga. She finished runner up on debut to undefeated stablemate Feel The Knight (who has won two on the trot after winning at Canberra on Saturday). 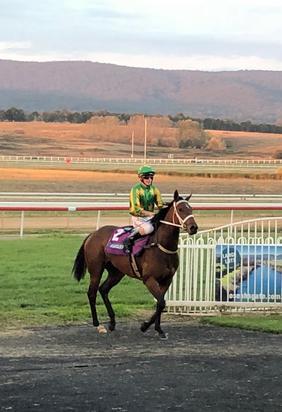 She then went one better as part of an all Goulburn trifecta, defeating stablemate (Scary Spice) and the Goulburn trained (Assault'n'Bathory) at start number two.

A daughter of Master Of Design and Braidwood bred by part-owner Mary Bray, Designer Dance gets her first look at her home track on Monday, tackling a Benchmark 58 rated race over 1300m.

Trainer Emma Longmire is thrilled to be getting such ‘upbeat’ results from a mare that the stable has always held a high opinion of.

“The results they haven't been a surprise. She has always shown us she has the ability”, Ms Longmire said.

Ms Longmire believes an aborted initial campaign and the resulting delay in getting to the races have actually been to the horse’s benefit.

“She was ready to race last preparation but ended up with a virus. We knew something wasn't right with her, we had her bloods done and she went out for another spell to get over it.”

The booming manner of her win at just start number two suggests she is healthy as can be now and the slight rise in trip on Monday shouldn’t pose a problem for the mare.

“She really relaxes early in her races, then switches on when she needs to, she's quite professional, so we aren't concerned about the extra 100m.”

Designer Dance stares down a few more seasoned gallopers this time around but the stable says it is looking forward to seeing how she will handle the rise in class on her home track.

“It's always a tougher contest up against seasoned horses, with the way she races she will need some luck.”

Goulburn’s track was originally rated in the soft range but is now a Good 4 which is pleasing for her trainer.

“A wet track would have been a bit of a concern, we are pleased it is drying out as we aren't confident she would go as well in the wet.”

Among the other Longmire runners is the half-sister to Designer Dance, Ronde De Jambe ($41), who is engaged in Race 1. Ironically, “The Ronde De Jambe” is a type of dance move!

Later on in the day the stable will also saddle up Defy ($10) and Alla Capella ($61), with both contesting race seven on the program. Ms Longmire says the stable is happy enough with their progress of late.

“Defy is a recent ex-Victorian purchase by the stable and is racing well. He is an honest horse. Alla Capella is putting it together this preparation but needs speed on to suit her racing pattern.”

It’s a busy day for the Longmire twins as they are also supporting their home racing scene as sponsors of race four on Goulburn’s program, the Twinstar Racing Benchmark 66 Handicap (1200m).

Goulburn’s first race kicks off at 1.40pm and the club is hoping for a more favourable hearing from the weather gods this time around after their most recent meeting (14th March) was postponed due to storms. Goulburn’s track is currently rated a Good 4.