It’s become commonplace for a Morgan to be front and centre in the Hunter & North West Qualifier of the Newhaven Park Country Championships. 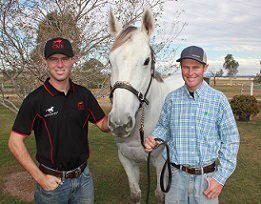 Tamworth trainer Cody Morgan has won the past two editions of the $150,000 race, held again at Tamworth on Sunday, with Unbiased and Ligulate but in 2021 his younger brother Luke is considered the best chance of continuing the family’s dominance on their home track with in-form gelding Depth That Varies.

Since they were kids there’s always a been a strong sense of rivalry between the two brothers and if a Morgan wins Sunday’s race you can be sure, in the moment, it won’t matter to either which one is successful.

“Cody and I work very closely together and we often work our horses together,’’ Morgan said.

“It’s good to have a little bit of rivalry but if I can knock him off it’d be even better.

“Cody has had a pretty strong hand over the last few years. I’ll certainly be cheering my horse home hard but if for some reason one was to beat me I hope it is his.”

In the early TAB market on Thursday with TAB on the Tamworth feature Depth That Varies was $8, Ronan’s Rock $9 and Shamusu Sho $26.

It’s well known that Luke was a world champion in the rodeo world and his horsemanship skills are regularly called upon by his brother to help work on problem steeds.

But if Depth That Varies can earn a berth in the $500,000 Newhaven Park Country Championships Final (1400m) at Royal Randwick on April 3 it’ll be quite a training performance.

The four-year-old, who possesses a strong finishing sprint, has never won a race beyond 1100m. He has been unplaced at both runs at 1200m and his major lead-up run was a win over 1000m at Tamworth on February 23.

It’s unorthodox, Morgan knows that, but he said it’s the way things have worked out and he has faith in the horse’s ability and the talent of emerging apprentice Dylan Gibbons.

“He went to town in a Highway over 1200m and nothing went right,’’ Morgan said.

“He was too fresh and did too many things wrong so we bought him back to 1000m where the speed was on and he was a lot better.

“If there was a race suitable here 10 days ago over 1200m he would have been at that distance.

“At the end of the day he’s qualified to race on his home track for really good money.”

Morgan said he’ll instruct Gibbons to change nothing on the gelding, despite stepping up in distance, and allow him to find his feet early.

If he can do that Morgan knows there isn’t a horse in the race with a better sprint at the finish, as his 32.56 final 600m from his last start win illustrates.

“I feel he is going to need a lot of luck just because we have that question mark up to the 1400m the first time,’’ he said.

“He has had three runs this time in and he races well at home so if he can come into it at the 600m, get a few breaks, it’ll be good to see him produce that turn of foot we know he has.”

Depth That Varies wins at Tamworth on February 23

Dylan Gibbons, 19, is the son of popular Hunter jockey Andrew Gibbons and he’s made quite an impact in his first year of riding.

“I think he is an apprentice that is ahead of his time,’’ he said.

“He’s riding so well and is associated with such a good stable in Kris Lees. He’s ridden the horse three times (two wins and a second) and I couldn’t fault any of his rides. He is a bit of a quirky horse and that’s why we elected to stay with Dylan.”

The first two across the line qualify for the final and Morgan, having kept a close eye on the heats in other districts over the past month, said it’ll be a huge thrill if his horse can take him to Randwick because he’ll go there thinking he has a strong chance of being crowned the 2021 country champion.

“I think our Hunter and North West heat is one of the stronger heats and whatever runs one-two on Sunday will be right in it come the final,’’ he said.