It takes a special kind of horse to be a successful trail rider. They need to know where to go when the rider doesn’t know how to direct them, stay calm especially if the rider is nervous and stand still when the rider decides to try and take their jumper off over their helmet and gets stuck halfway. 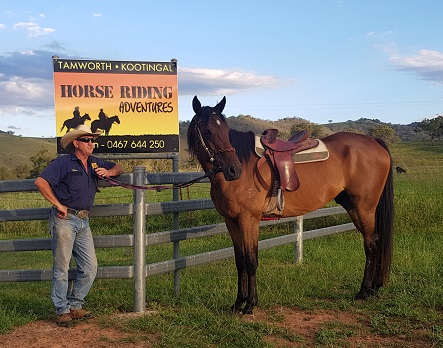 “That happens more than you would think,” Jason Newman, Owner/Operator of Tamworth Kootingal Horse Riding Adventures said. “Our horses need to be bombproof to counter the inexperience of our riders. We don’t take chances.”

Tamworth and Kootingal Horse Riding Adventures caters for first timers through to experienced riders aged 12 and older.  Jason carefully hand picks his trail riding horses and tests them himself again and again to be certain they are suitable for the job. He has ten horses in his team at the moment and the star of the herd comes as a surprise to most.

Love Gun is an off the track thoroughbred who failed to fire as a racehorse. He began his career with John Thompson in Sydney but poor trial results showed he wasn’t up to city class so he was transferred to Melanie O’Gorman’s Tamworth stables. In his one start for her he came 17 lengths last so she knew she had to find a good home for him sooner rather than later. She approached Jason to see if he wanted Love Gun as a trail riding horse and initially he wasn’t interested.

“I said to Mel I don’t mean to be rude but thoroughbreds are born to run and I don’t think he will make a very good trail riding horse,” Jason said. “But Mel insisted he was ideal so I agreed to have a ride on him. From the get-go he was so placid and laid back. He was only three at the time but was like a cool old horse.” 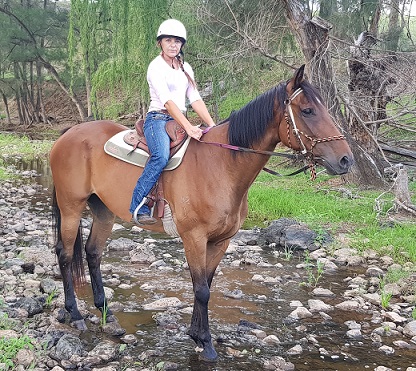 Love Gun is thriving in his new career.

After about ten rides Jason was satisfied Love Gun was going to be a suitable addition to his team and began retraining. He took everything in his stride and never put a foot wrong.

“It’s like he was born for this industry,” Jason said. “I can outrun him with thongs on but he is such a sweet natured horse and none of the silly things riders do faze him. I am thinking of renaming him Forrest Gump because that’s the sort of personality he has.

“He fitted in beautifully with the rest of the herd and doesn’t bite or kick. It’s clear he has had a good education previously as well. That’s really important.”

It’s a relief for Melanie knowing Love Gun has gone to a nurturing home where he has a purpose. When Jason next needs a horse for his trail riding business Melanie O’Gorman’s stable will be the first place he looks.

“You still have to be careful and assess each horse individually,” Jason said. But I’d happily take another thoroughbred like Love Gun. We’ve had him for three years now and he’s just a pleasure to be around.”