Local Trainer Confident Gelding Can Make It Two On End

Trainer Brett Bellamy has always had a good opinion of last-start maiden winner Man With A Plan and believes the four-year-old can complete back-to-back wins when he jumps to a Class 2 at Coffs Harbour on Tuesday.

Bellamy will be a busy man at his home track with 13 runners at the eight-race meeting, including three last-start Coffs Harbour winners in Man With A Plan, Boncosta and Star Fest. 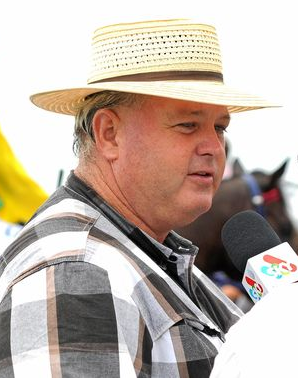 The trainer, who has posted winning doubles at the past two Coffs Harbour meetings, rates Man With A Plan in the Class 2 Hcp (800m) and Boncosta in the Benchmark 66 (2000m) as his two best winning hopes.

Sequalo gelding Man With A Plan showed marked improvement at his fourth race start when he resumed to win his maiden at Coffs Harbour on February 24, covering the 810m in a slick 46.19.

That effort was long overdue as far as Bellamy was concerned as he had been baffled by Man With A Plan’s three efforts late last year when he was unplaced at Grafton, Port Macquarie and Coffs Harbour.

“He always showed me that he had a lot of ability on the track and in his trials, but then he just raced horribly and I’ve got no idea why,” said Bellamy.

“So it was good to see him show the sort of ability I always thought he had when he won here first-up in very good time. If he races up to his ability again on Tuesday, I don’t think he’ll have any problem stepping up to a Class 2.”

Bellamy said Man With A Plan was clearly the top pick of the four runners he will saddle up in the Class 2, alongside Firing Line, Gohardonhula and All About Charlie. Jockey Ray Spokes, who partnered Man With A Plan in his maiden win, takes the ride again on Tuesday.

“Maybe Man With A Plan had just missed Ray in his first three disappointing runs last year,” quipped Bellamy. “Ray had done a lot of work with him before he’d raced but couldn’t ride him in his first three starts due to a toe injury. Who knows?”

Boncosta has been racing well, particularly at Coffs Harbour where he has won at this past two runs there – a Benchmark 58 over 1600m four runs back on January 13 and a last-start Benchmark 66 victory over 2000m on February 24.

Boncosta led throughout last time out and Bellamy is banking on the gelding getting a ‘soft lead’ again in Tuesday’s race.

“If they run the race the same way as they did last time, he should be hard to beat again. I’m hoping he’ll get a soft lead, but things don’t always work out the way they look on paper,” said Bellamy.

Bellamy will also run Bromach in Boncosta’s race and thinks he can improve on recent efforts.

Bromach is coming off a last-start fourth, beaten just over three lengths, behind Boncosta over 2000m on February 24. Boncosta carried 56.5kg to Bromach’s 54kg last time, but the winner goes up to 59kg on Tuesday.

“I gave Bromach a quick freshen up then had to rush him into his last three runs at Grafton (February 7), Port Macquarie (February 17) and Coffs Harbour (February 24),” said the trainer. “He’s had a little bit of extra time between runs this time and his work has been good. If there’s a blowout result in the race I hope it’s him.”

Bellamy also thinks first-starter Happy Frank, Rispetta and Star Fest can all race well in their respective races. Happy Frank, a three-year-old son of Drumbeats, geared up for his debut with a third to Alternative Facts and Princess Elle n a Coffs Harbour barrier trial over 810m on March 4.

“He trialled very well behind Alternative Facts who then ran well at Newcastle on Saturday. The 1000m on Tuesday probably will be too short, but I expect him to race well,” said Bellamy.

“Rispetta can be her own worst enemy in her races, but she could improve back here on her home track on a quick back-up, with a good draw (barrier one) and stepping up to the 1400m.

“And Star Fest has to drop back to the 1400m on Tuesday, which isn’t really ideal, but he is coming off a good win here where he had the race won a long way from home. And he’s a big, strong horse, so the 61.5kg isn’t too much of a concern.”

Star Fest recorded his fourth win at Coffs Harbour last time out on March 4 when he romped home in a Benchmark 58 over 1615m.