Live Chance For The Kosciuszko Trialling At Wagga (Thurs)

Accomplished Corowa veteran Geoff Duryea has a couple of value chances where heavy trackers are likely the prime requisite at Wagga Wagga’s TAB meeting on Thursday, but his prime focus will be a gallop after the last race where there’s no betting but abundant class and no shortage of spectators.

Durye,a who rode Red Hope in the 1973 Melbourne Cup and then became a Riverina training great, fancies restricted class gallopers Cloud Nine and Job in suitable races, while his October $1.3 million The Kosciuszko contender News Girl will trial.

Both have dominant form credentials for regional racing’s richest and most prestigious race. 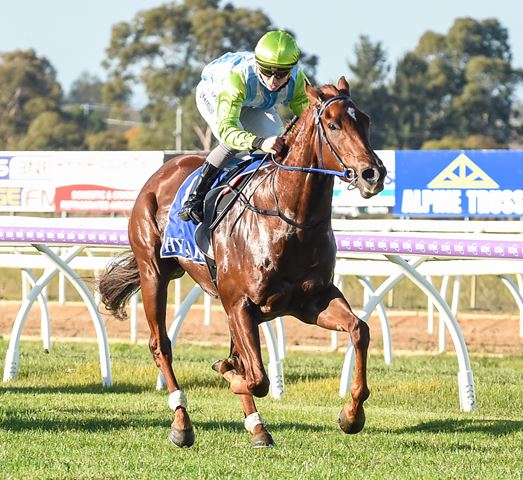 News Girl has won three at Caulfield and Front Page won in Listed class down the revered ‘straight six’ in near record time.

Duryea tentatively nominated both for Thursday’s $35,000 Ian Reid sprint feature and got what he anticipated.

“Well and truly weighted out." Hardly unexpected that News Girl, off a brilliant Caulfield win (her third there since December) was allocated a record 66kg and 63kg for Listed winner Front Page.

“Lap of the Gods at the moment with the travel restrictions, we all understand but time is running out,” Duryea explained.

“They need racing, it’s a two-day trip if we race in Sydney compared to three hours to Melbourne.

“Naturally that’s my preference - what’s best for the horses and owners. I mean, the mare has won three at Caulfield and Front Page won unextended at Flemington and ran some time.”

The 1:09.560 is 'Nature Strip figures'. Neither sprinter has raced in Sydney so Duryea’s preference is a “no brainer.”

He’s more forward than the mare - she needs more warm-up so she’ll have a hit-out on Thursday.

“We’ll look at maybe a trial next week for Front Page. But we’re on delay like a lot of others,  we understand the precautions so we’re just hoping - hands tied.”

Meanwhile, modest stablemates, Cloud Nine contests the second race on Thursday and Job the final event, both to be ridden by Jordan Mallyon.

“Cloud Nine will be hard to beat - a swimmer that won by ‘six’ on a heavy eight at Narrandera; we’ve finally got him over some issues,” Geoff explained.

“He’s up in grade but can go on with it now he’s broken through. He’s done really well since if it stays that heavy.

"He’s a monster of a thing, he’ll be even better suited out to a ‘mile’ from 1400m. And with his old issues, really appreciates give in the ground.

"The big boy has the makings of a nice horse. Job has more ability than his form shows, he’s been showing enough on the track to suggest he can win a steady maiden.”

At present Wagga Wagga is rated a Heavy 9 in fine weather.