Sunday was a day to remember for Joe Cleary and his racing team who dominated the annual Queanbeyan Cup meeting.

Cleary, who trained four winners on the seven-race-program, also trained the three feature race winners, including the 2000m Queanbeyan Cup, with Havaduel ridden a treat by Blaike McDougall to take out the $35,000 event.

Kiss My Swiss, who has Ellen Hennessey in the saddle, was too good for her rivals in the 1000m Thunderbolt, while Shaun Guymer guided Little Krakatoa to victory in the 1000m Golden Nugget and Amy McLucas steered Concrete to a dominant win in the 1200m Benchmark 58 Handicap. 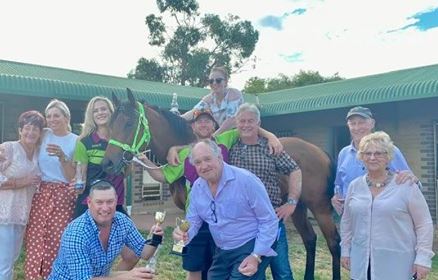 The Joe Cleary racing team celebrates after winning four races, including all the feature events, at the annual Queanbeyan Cup meeting. Image by Joe Cleary Racing

The proud trainer, who is based at both Queanbeyan and Moruya, couldn’t hide his pleasure when taking to Facebook after the momentous occasion.

“What a Day,” Cleary said. “Not very often I’m Speechless. But (I’m) just so, so proud of all my gang at Lunatic Lodge. Both Queanbeyan and Moruya stables on fire today. Boooommmm.”

Cleary is no stranger to featuring at the Queanbeyan Cup meeting either, going close to winning the event in 2018, with Cliff who ran second, and again going close in 2019, with Tag and Release, who finished third.

“I think in the last decade, we have had three winners and five seconds in the Cup; it’s been a race that we always try and target and today, it all came down to tactics and we were able to win it again,” Cleary said.

“My wife and I sit there three months beforehand and start looking at the races and work out what horses will go where, and today we had seven horses that we thought may race and we ended up with six starting and four winners, a third and a fourth.”

The popular South East trainer couldn’t thank his hardworking team enough either, suggesting the result wouldn’t have been possible without his big stable of helpers.

“At the end of the day, I am just a name in the racebook,” Cleary said. “It is a massive team effort and we’ve had a good weekend, we had a winner yesterday at Cowra and it brings real satisfaction, as we work as a big team.”