Apprentice jockey Elissa Meredith was involved in a fall aboard Starlink during Race 5 at Gunnedah on Monday, 4th July 2022.

[Update on Monday 15th August]: Elissa has left John Hunter Hospital for the first time since her fall at Gunnedah in July. She was reunited with her dog Frankie for the special occasion and is now heading to Ryde Rehabilitation Centre in patient transport. Elissa continues to make positive progress each day. (Image supplied by the Meredith Family) 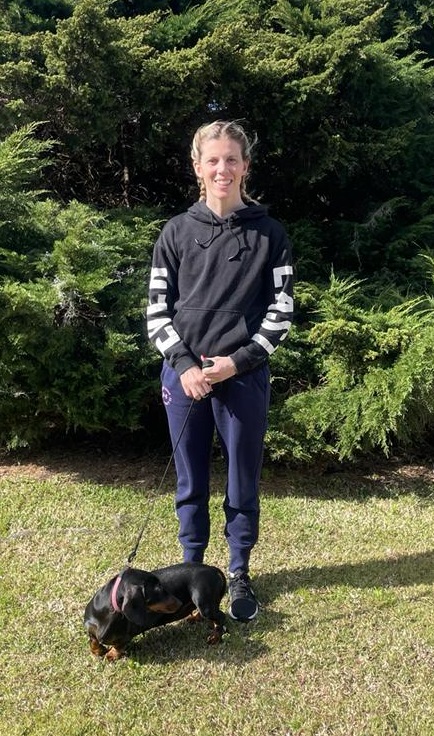 [Update on Tuesday 9th August]: Elissa will be moved to the rehab ward at John Hunter Hospital tomorrow after making positive progress. She is then expected to be moved to a rehab facility at Ryde next Monday.

[Update on Thursday 4th August]: Elissa’s feeding tube has been removed and she is now eating on her own. She is also now walking short distances without assistance and will be moved to rehab once a bed becomes available.

[Update on Monday 1st August]: Elissa is walking more and is also starting to eat on her own. Doctors are hopeful that her feeding tube will be removed in the next few days.

[Update on Tuesday 26th July]: Elissa is talking more and is also walking short distances with physio assistance at hospital. She is still expected to remain in hospital for at least three more weeks before transferring to rehabilitation.

[Update on Saturday 23rd July]: Elissa spoke her first words today and her memory is returning. She will remain at John Hunter Hospital for approximately three more weeks and will then enter rehabilitation.

[Update on Thursday 21st July]: Elissa continues to make steady progress and got out of bed for the first time today. She walked across the room with assistance, making her first steps since the fall on July 4th.

[Update on Monday 18th July]: Elissa continues to make steady progress and is getting much needed rest. She is waking for short periods, eating & drinking on her own and is more alert and aware of her family.

[Update on Thursday 14th July]: Elissa continues to make a steady recovery; she can’t yet verbally communicate with her family due to effects caused by the breathing tube that was removed on Sunday. However, she remains alert and aware and is getting plenty of rest.

[Update on Sunday 10th July]: Elissa is starting to wake from her coma and has recognised family members.

[Update at 9:45m on Friday 8th July]: Elissa has been moved out of ICU to the neurology ward at John Hunter Hospital. She remains in a coma but is now breathing on her own.

[Update at 2pm on Wednesday 6th July]: Elissa remains intubated in John Hunter Hospital. She is in some discomfort with Doctors providing pain relief.

[Update at 10:20am on Tuesday 5th July]: Elissa is comfortable and remains stable at John Hunter Hospital. Doctors are assessing her and may undertake further scans this morning.

[Update at 6:40am on Tuesday 5th July]: Elissa has two contusions on her brain but no swelling or bleeds. She has been moved to ICU to monitor, keeping her intubated and in an induced coma for now. No other injuries.