As much as trainer Rod Northam could claim credit for Spiranac’s sensational win in the Newhaven Park Country Championships Qualifier (1400m) at Tamworth on Sunday for him it was all about his apprentice Reece Jones. 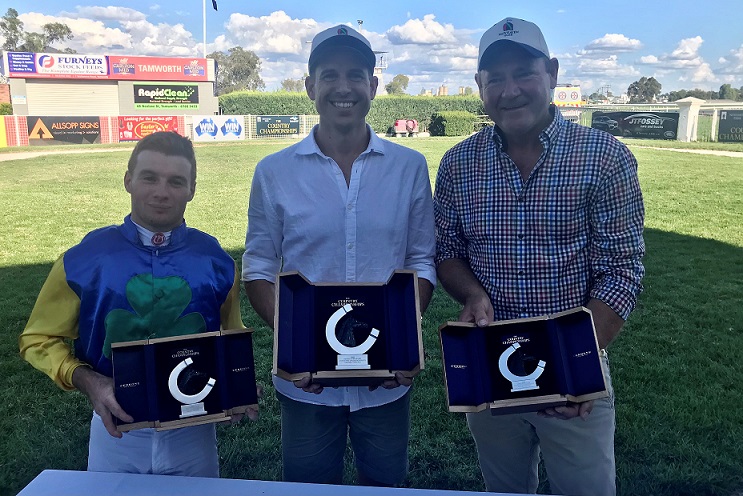 The 24-year-old has been a revelation in the past six months or so and he returned to the scene of his first ever career winner to post the biggest victory of his career to date.

He scored his first win at his first race ride at Tamworth in August 2018 on a horse called Social for Rod Northam.

And it was a patient and calculated ride from Jones as he worked the four-year-old through the field and hit the lead in the shadows to down the Cameron Crockett trained Pure Fuego with Luke Morgan’s Depth That Varies coming from last to run third.

Northam has been placed in two Country Championships Finals – Voodoo Lad ran third in 2015 and After All That second in 2017 – but Spiranac could well be his best chance of claiming the $500,000 event at Royal Randwick on April 3.

“Where he’s come from in four years - he couldn’t put a head collar on a horse, after six months I asked him who the Slipper winner was and he didn’t know.

“I said to him once ‘you’re not going to make it’. He’s a little legend and he’s ridden that a treat. Bring on Sydney.”

The mare, named after former American golfer and social media star Paige Spiranac, firmed into $11 with TAB for the Final after the win, along with Pure Fuego, and Northam said if she can strike a good surface she’ll be hard to beat.

Spiranac’s major lead-up to Sunday’s Qualifier was in the Group 3 Triscay Stakes at Randwick but she couldn’t produce her best on a very wet track.

“She’ll be fourth up, Randwick will suit her,’’ he said.

“She didn’t handle it the other day when it was shifty, she doesn’t like shifty ground, but if she gets a good track I can’t see why she won’t be in the finish.”

It’s been a big week for Jones.

He posted his first metropolitan winner at Warwick Farm on Wednesday – Kosciusko for Jim and Greg Lee – but his association with Spiranac made the moment special.

“She’s a lovely ride. Even in trackwork she’s beautiful to do anything with,’’ he said.

“She has a bit of attitude about her but she’s been a great horse to me.”

The win took Jones’ record on Spiranac to five wins and a second from six rides and he has a compelling case to retain the ride in the Final.

Northam said it’d be hard to remove Jones from the saddle but will confirm with stewards whether the apprentice can take the ride before confirming anything.

As for the race, Jones said he wasn’t quite as concerned as Northam was in the run but it was a matter of getting the breaks at the right time.

“She has been a bit slow away lately but I gave her a squeeze out so she didn’t miss it,’’ he said.

“I was able to switch her off, at the top of the straight I was trying to weave a passage to get out because I knew she would be strong to the line.”

Cameron Crockett thought Pure Fuego was a horse for next year’s Country Championships series but is rapt to qualify the lightly raced four-year-old for 2021.

It was the gelding’s seventh race start and Crockett said if he can draw a favourable barrier in the Final he’d head to Randwick confident he will be competitive.

“He’s been at his peak from his second run and hasn’t taken a backward step once.

“He has great fitness on his side so four weeks into the final will be ideal and we might find a trial for him somewhere.”

All the results and replays from Tamworth's Country Championships meeting