Prima Stella ‘won’ the South Grafton by panels of fencing – but you won’t see the victory listed in any form guide.

The Kempsey-trained galloper reared just as the starter pressed the button and dislodged his jockey Ben Looker. 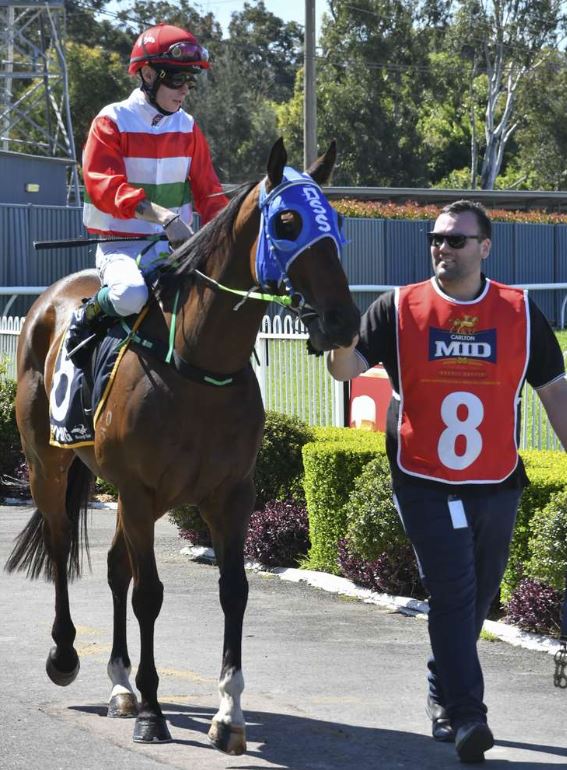 Prima Stella then raced around the field and there he stayed, loping along with no jockey, five and six lengths ahead of the field until passing the winning post.

“A barrier attendant had a hold of his head and he went up in the air as the gates opened and Ben came off,” explained trainer Daniel Simonetta.

Simonetta, 26, trains a small team of seven gallopers in partnership with his uncle Rocky at Kempsey Racecourse.

He admits it’s a steep learning curve but he’s loving every minute of it: “The horses keep us busy with early mornings and late nights, but it’s all fun.

“My dad and I were into training greyhounds but decided about six years ago to give it away,” Simonetta said.

“I was a strapper with Hilary Dew and decided to get my licence and start training with Uncle Rocky.

“We’ve had a few winners this year and I’m learning quickly. It’s been marvellous and will give me lifetime skills.

“We are in a fantastic part of NSW – we often take the horses out to Hat Head and Crescent Head for a gallop and a walk in the surf afterward.

“They love it and it helps their attitude; they’re different horses to when they first came into our stables.”

Prima Stella will be starting in the $150,000 Carlton Draught Coffs Harbour Cup (1600m) and Simonetta rates him a top chance.

“The horse has a heart of gold; he just tries so hard for us. He’s in perfect shape for Coffs.”

At his previous start, Prima Stella had battled on strongly to win at Port Macquarie: “He’s quirky and is an impatient horse, he just wants to get on with the job.

“One day at Port Macquarie an attendant dropped a towel they were using to wipe off the sweat and he went off. To his defence, he had been standing in the gates for about five minutes waiting for other horses to load.”

Simonetta said the Kempsey Cup in November will again be his aim but unfortunately, the meeting was called off last year due to bushfires.

Prima Stella and Amore Moderno are half-brothers being out of Italian Beauty with both owned by Angelo Lapenna who “loves his racing”. Amore Moderno has only raced on six occasions and just twice for the Simonetta stable.

The three-year-old made his stable debut with a photo second at Port Macquarie before holding on strongly to finish second in a $45,000 maiden during the Grafton Cup Carnival.

And Mister McIlroy will be lining up in the $50,000 Daniel Baker Showcase Sprint (1200m). The six-year-old was parked three-wide most of the way when fourth at Grafton last time out.

“He did a great job after such a tough run,” Simonetta said. “He finished only a length from the winner.

“He beats Prima Stella every time we put them down and won three straight races at Kempsey, Coffs [Harbour] and Grafton last spring.”