If it’s not enough having a building named after you, then try having a race named in your honour enough times to give you another 15 minutes of fame. That’s the scenario for Goulburn local legend and race honouree, Fred Cooper, with the running of the Fred Cooper Cup at Goulburn on Thursday.

The 1600m race should take around 95 seconds to be run and won which should take Fred close to his allocated 15 minutes of fame as the race enters its ninth edition in 2018!

One of the club’s favourite sons, Cooper is fast approaching 40 years as ‘part of the furniture’ at Goulburn and epitomises the country racing ethos of rolling up your sleeves and getting the job done. 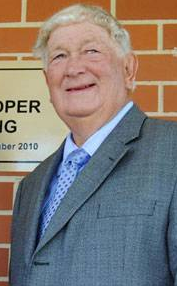 Fred Cooper [pictured left] has dedicated himself to countless projects for Goulburn Race Club but he’s not the type of bloke to come out and tell you that the main building at the tablelands track is also named in his honour.

Cooper has given thousands of hours of his time to the betterment of tablelands racing over the last 20 years, whether in the role of President, Vice President or mowing his beloved Goulburn track. The Goulburn stalwart was also awarded the first ever Simon Nivison Special Achievement Award for service to Country Racing in 1999/2000.

His tireless efforts in the development and upkeep of the Goulburn track has helped play a major part in making it one of the most competitive racing surfaces in NSW.

Ken Ikin, the current President of Goulburn Race Club, acknowledges the “impossible to value” contribution Cooper has made to his local club and country racing in NSW.

“To borrow a Christmas phrase Fred has been the gift that just keeps on giving for a club like ours”, Mr Ikin said. “Next year will mark forty years that Fred Cooper has been involved in the Goulburn District Race Club in some capacity, an amazing achievement!

“Without his drive and passion supporting this club there is no doubt that our progress would have been slower in that time and country racing all the poorer.”

Cooper himself is looking forward to the running of ninth edition of the race named in his honour and has recommended punters follow his simple form analysis on the day.

“Follow the locals! Last year at the corresponding meeting we had locals win three races and finish runner-up in another,” Cooper said. “I’m extremely proud of what this club and has been able to achieve to date and wish it all the continued success. The continued support of Racing NSW, trainers, owners, jockeys and our local staff is what makes this venue such a great place to race!”

Local trainers will be well represented on Fred Cooper Cup day with the likes of Kurt Goldman, Emma & Lucy Longmire, Danny Williams, Sarah Murray-Leslie and Skye Wansey saddling up runners in the support races alongside Mark Gee and the Dryden/Collings combination who both have runners in the feature race.

Goulburn’s first race on Thursday is timed to go at 1.50pm and the track is currently rated a Soft 5.