Fred Happy To Get Back To Home 'Coop' (Friday)

Goulburn will host its final race day for 2020 on Friday and the day honours one of its most tireless contributors in Fred Cooper.

"Super Cooper" as one official dubbed him years ago, receives due recognition with the feature race on the program, The Fred Cooper Cup over a mile and presents on Friday in its 11th edition.

Despite a sprightly 88 years on the clock, Cooper still loves a wisecrack, having one at his own expense when casting an eye over the form guide for his race and spotting a horse called All But Gone ($7 on TAB). 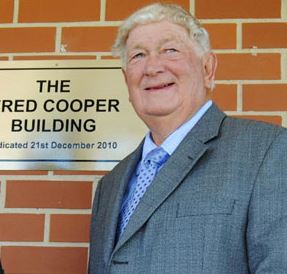 "Geez, I hope that's not an omen for me ... not just yet anyway", Cooper quipped.

Cooper also touched on the frustration of not being able to get out to the track for a large part of 2020.

"It will be a real pleasure to be back at the races this Friday after the Covid 19 restrictions we have all gone through. I've always really enjoyed just being at the track whether it's a raceday or not. "

Cooper takes great pride in seeing the locals go big on their home track and taking his 88 years as a form reference, he has immediately found 'the 8' (Defy, $19) in his own race as being a local hope.

Defy (Twinstar Racing) will carry saddlecloth number 8 and take up the cudgels for the locals in the feature. The gelding has a handy record at a mile but will need to shake off a plain home track record and a host of out of towners to snare some major money in the race.

Goulburn's first meeting for 2020 back in January was dominated by city stables with six of the seven races won by the boys from the big smoke.

And whilst this last meeting for the calendar year could easily go the same way with a host of city dwellers trekking to the tablelands on Friday, a 'push back win or two' by the locals in honour of Cooper, one of the club's favourite sons, would be ideal.

For those who believe in the racing gods or are looking for a positive lead on the day here's a quick run-down of those locals accepted on Friday's Goulburn card.