A former accomplished equestrian rider will be represented by two racehorses at Coffs Harbour on Friday as he slowly builds his small stable’s momentum.

Chujo, 37, is a talented equestrian rider having worked under legendary Aussie equestrian families the Hoys and Roycrofts. He was born in Saitama, Japan, and didn’t see a real horse until 14 years of age. 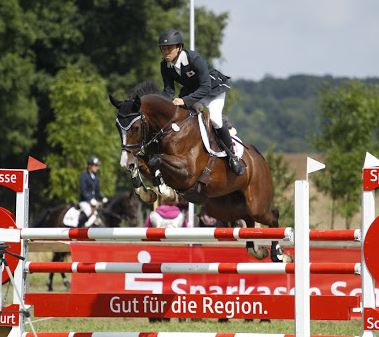 Daiko Chujo heads over the jumps

“I moved to Australia and enrolled in the Australian Racing Industry Training Centre to train as a jockey,” Chujo said.

“I graduated the racing school but decided to continue with horses along the lines of coaching and the Olympic disciplines, so I gained my EA Level 1 and started dressage and eventing.

“I’ve been here for 20 years and now have an Aussie accent!” he chuckled.

“I came from Japan with my best mate Kanichiro ‘Joe’ Fujii (who is now based in Japan – Joe was quite successful in NSW riding 279 winners) and rode trackwork for some time.”

As an equestrian, Chujo competed on the world stage in Poland and Germany and has represented Japan at the Asian Pacific Challenge where he finished second. After competing at 3-star level of eventing in Australia, Daiki ventured to Europe and successfully contested international classes.

“While in Germany I worked with two Olympians, Dirk Schrade and Yoshiaki Oiwa and my fundamental method of training is greatly influenced by these two great trainers.”

He has also gleaned further experience having worked with top trainer Kris Lees and Paul Perry.

Chujo has seven horses in work and has already won races at Murwillumbah, Coffs Harbour and Lismore.

“I have some Japanese owners supporting me; I have mostly young horses so we will have something to look forward to in the next two to three years.”

“It’s about 20 acres and aside from training racehorses, we do pre-training and breaking in, as well as dressage, jumping and eventing,” he explained.

“We can work the horses on our hills and put them over jumps, this keeps their minds fresh. And we also take them to Cabarita Beach which is only five minutes away.”