An eight-year-old galloper which has won only one race from seven starts heads the markets as an early-odds on favourite in the Horsepower Class One & Maiden (1750m) at Muswellbrook on Thursday.

Streetcar To Stars ($1.70 on TAB fixed odds), to be ridden by Chad Lever and having its first start for Paul Perry, is a former British-bred horse that Lloyd Williams had with John Oxx in Ireland. The horse won a 2000m maiden at The Curragh, ran third (four runners) in the Group 3 Ballyroan Stakes (2400m) at Leopardstown and fourth (five runners) in the St Leger Trial (2800m) at The Curragh. All three runs were in June and August 2014. 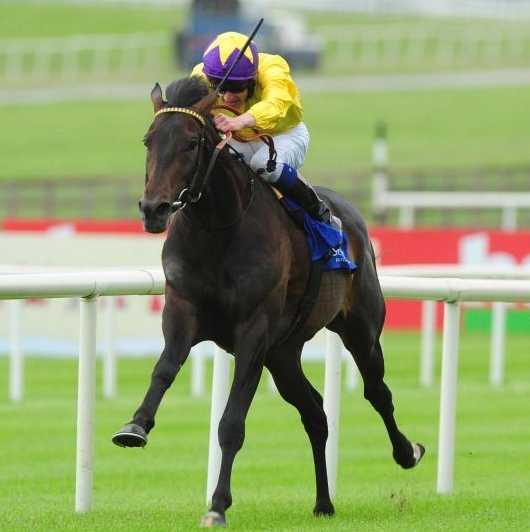 Streetcar to Stars in winning form at The Curragh

Wiliams brought the horse to Australia as a possible Melbourne Cup contender but then trouble set in with the horse suffering tendon injuries to both his off and near front legs.

He spent almost four years recovering before resuming for a second over 2400m at Sandown in July last year before a fifth over 2500m at Moonee Valley 17 days later after over racing in the middle stages.

A veterinary check found no recurrence of the tendon problems but the decision was taken to sell him. Perry was at the sale.

“Someone I was talking to suggested he might be a horse that we could do something with so we bought him,” Perry said from the Gold Coast sales on Wednesday. “His work has been OK and he has had two trials so this is a good race to kick him off in. Apart from that, there is not much I can tell you except that he is a nice horse that is bred to stay.”

Streetcar To Stars dominates the race as the $1.70 favourite with the Tracey Bartley-trained Al Pheroz and the Angela Davies-trained Magic Name, the only other horses under double figures at $8.50.

The interesting runner is the Allan Denham-trained Silent Jack ($10), named after his late father and raced by the Denham family. He won his maiden, over 1500m, on this track at his second start then failed at his next nine starts.

However, the now five-year-old bred in New Zealand on stout staying lines, ran a vastly improved race when second over 2200m at Scone on December 29. This is a sharp drop back in distance but he can sit off the pace and he has Robert Thompson aboard.

Beaufort Park had no luck on debut when seventh in a Goulburn maiden after being continually held up for runs in the straight.

Hacksaw Ridge won at Gold Coast maiden in October 2017 but after four failures was spelled and sent to Ryan. In his second trial for Ryan he ran fifth at Rosehill, beaten only 2.3 lengths by Glenall and Egyptian Symbol, after racing just off the pace until late.