Anthony Warren was all smiles at Murrumbidgee Turf Club on Saturday after he broke through for his first winner as a trainer.

The Sutton Forest trainer prepared Storm Force, who cruised home for an easy victory when winning the 1050m Class One Trophy Handicap.

Ridden by Brent Evans, the six-year-old was never worried in the event, winning by 2.52 lengths and with a leg in the air. 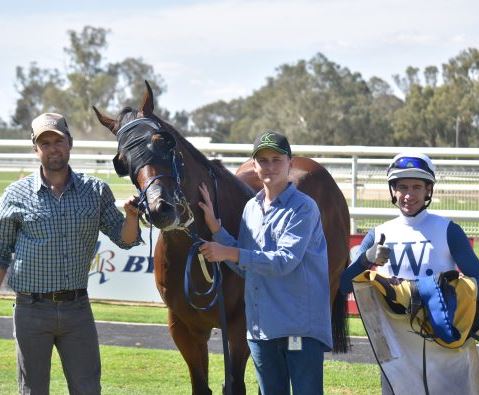 Anthony Warren (left) was all smiles after Storm Force won at Wagga picnics on Saturday with jockey Brent Evans on the right.

Warren was understandably thrilled after the event and even joked he had earned his first win just in the nick of time.

At the beginning, I set a goal that I wanted to train a winner in my first 10 starts and that was my tenth start, so I just got it in.”

The 30-year-old also thanked Brent Evans for the ride and explained how he gained the services of the popular picnic hoop: “It was a great ride by Brent, he rode him very well,” Warren said.

“Brent actually contacted me about the ride at Crookwell and after that meeting was cancelled, I thought I would headhunt him and get him booked as early as I could for Wagga.”

Warren, who has only been training for 18 months, is a popular Southern Highlands farrier, who predominantly works on thoroughbreds.

The farrier turned trainer explained how he got his hands on Storm Force, who was a $900,000 yearling purchase at the 2015 Inglis Australian Easter Yearling Sale

“He was owned by GPI racing (Greg Ingham) and he was with team Hawkes at Rosehill but he had some issues with his breathing and ended up with another trainer,” Warren said.

“I am quite close with the Ingham family and I always had a bit to do with him, I rode his work for a bit and when the previous trainer said he was going to be up for sale, I bought him.”

It wasn’t all smooth sailing for Storm Force and Warren though, with an interrupted preparation and a case of the thumps putting back their grand plans.

“With the bushfires, he had a disjointed preparation and then he pulled up with Cardiac Arrhythmia after a run at Cowra,” Warren said. “We only went to Wagga for a bit of a gallop and to be honest, he probably ran better than we had imagined.”

Warren believes the run will do wonders for his well-bred gelding, and plans on backing him up shortly.

“I think this win will be really good for his confidence and with his breathing issues,” Warren said. “All good well, we will back him up at Wellington this weekend.”