End Of An Era At Inverell As Brian “Spike” Baldwin Retires

The bush racing calendar has been hit by cancellations and changed dates because of the COVID restrictions but Inverell Jockey Club will pull out all stops to provide a chance for racegoers and non-TAB horses to get to the races on Saturday. Various COVID precautions will be in place but the meeting will go ahead and the gates are open.

The upcoming season will also be the end of an era as it will be the first year in over 62 years that the irrepressible Brian “Spike” Baldwin will not be calling races at Inverell.

After a long career of helping entertain the crowds at harness and galloping meetings across the North West, Spike has called it a day, again. 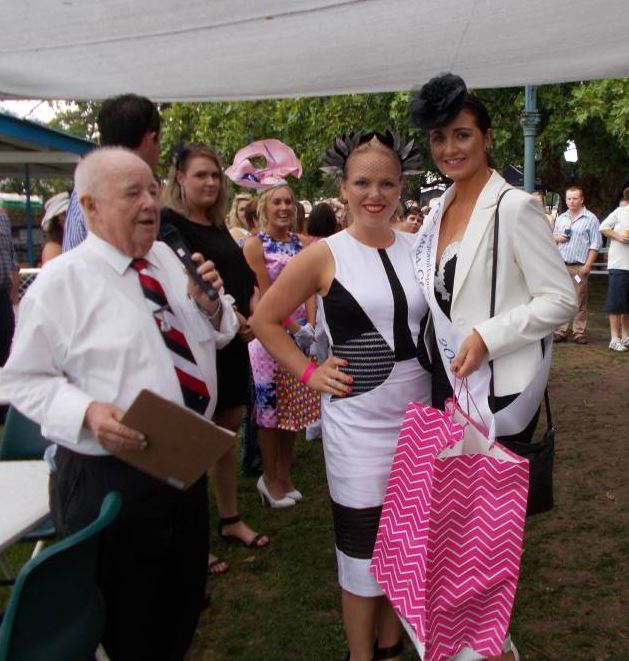 Previous attempts to retire have been set aside because a club somewhere needs help and Spike finds it hard to say no.

Brian has had a few farewells but after calling the races in the heat of the Boxing Day meeting at Inverell he announced that was definitely his last call, ending a career that officially started at Inverell Showground calling the trots at the 1958 Inverell Show.

Unofficially, the career started as a fresh-faced teenager in his home town of Manilla calling races at the “All Heights” races. All Heights were unregistered but not necessarily legal pony races catering for horses of all types and sizes hence the name.

As everyone that knows Brian would be aware, he would never have been associated with anything illegal, unless of course, he could get to confession before the end of the week.

With his usual enthusiasm, Spike tells the story that he had come to Inverell in 1958 as a young stock and station agent at a time and was getting out and meeting people at the show, wherein those days there were 26 trotting races run over two days.

Brian was keen to impress so on the first day of the show he approached Reg Clarke who was the racing steward for the trots and asked did they need a hand with anything. He was promptly dispatched to the stand inside the track at the far corner and make sure no one cut the corner and got an unfair advantage.

Acting as a guidepost wasn’t quite the start he was expecting but his luck was about to change and he would be soon given the chance he was smarter than a silent cop.

Whether it was the pressure or the celebration of the first day, something caused the regular caller to appear in a less than tip-top condition on the second day and without notice Spike was called upon to call 13 races over the day and night.

His first call of the gallopers at Inverell Racecourse was in 1962 and he has been pretty close to the microphone there ever since. His opportunity again came about because of the unexpected absence of the regular caller.

In those days Doug Trimble called at most of the tracks in the area and was a bit of a legend with a voice made for race calling. Doug worked at Wellington Vale near Deepwater and was hurt in a horse fall while doing stock work so long time Inverell Jockey Club Secretary Jack Marquart rang the young stock agent that called the trots at the show.

Brian jumped at the chance and the rest, as they say, is history. He hasn’t always been the main caller at Inverell and took a keen interest in mentoring current caller Greg Kachel into his successful career and serving Inverell Jockey Club as President, treasurer, patron, sponsor, committeeman and master of ceremonies.

Brian has called at racecourses from Lightning Ridge to Bogan Gate and all points in between enjoying and adding to the theatre and colour of racing. He names old-time champions Scottish Crag, Tiny’s Finito and Gold Fiddle as the best he has called.

Never a punter, but always close to racing, Spike has dabbled in ownership and almost won an Inverell Cup with 100/1 shot Mediator and even conducted yearling sales in Inverell as part of his stock and station business.

As a spectator, he has been to five Melbourne Cups and racked up 40 years attending the Brisbane Stradbroke Handicap and Brisbane Cup meetings. A highlight was a trip to Ireland to witness Vintage Crop win the Irish St Ledger at the famous Curragh racecourse before coming to Australia to win the Melbourne Cup.

Spike has called more Melbourne Cups than any other caller in Australia, it’s just they weren’t in Melbourne, usually, they were phantom calls at charity Calcuttas and he claims he rarely picked the winner.

He was awarded an OAM in 2013 for his work in many communities and church organisations and much of that work continues as will his involvement with racing, it’s just he won’t be calling ... unless, no, he has definitely retired, again.