Several Country Championships contenders will take their place at Albury on Friday in an early showdown for the big race in two weeks.

Wagga trainer Wayne Carroll likened the SDRA Championship Preview (1400m) as the last game before the big one with the Albury qualifier scheduled for Saturday 23 February.

Carroll holds a few aces at Albury with Rock ‘n’ Roller and Fashion Tip starting in the main event, while Lady Mironton resumes racing in the Benchmark 58 (1175m). Carroll’s trio will all progress to the $150,000 Championships Qualifier and he is looking forward to seeing them perform. 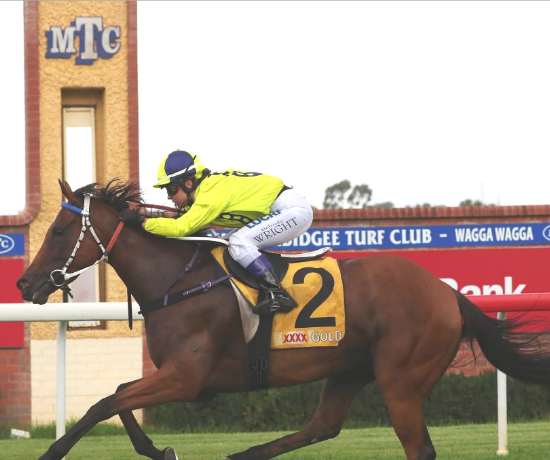 Fashion Tip (Belinda Wright) scores at Wagga and will take stopping at Albury this Friday. Image by Emma Hillier

“These races are what it is all about and it’s like the last game before the grand final,” he said.

Carroll is likely to have the highest numbers on February 23 with three qualifiers after having just one previous representative in the series.

“I didn’t have a runner last year and hopefully will have three this time which is exciting for the owners and the stable,” he enthused.

“Lady Mironton is probably my number one because she has done a bit more in her career, but there isn’t a lot between them.

“Rock ‘n’ Roller has come along way and his breeding suggests he will get the 1400 metres.

“The Championships have always been his target so I’m looking forward to seeing him race again.”

As for Fashion Tip, Carroll knows what to expect and he has entrusted the ride to stable apprentice, Belinda Wright: “She put a nice field away last time, is a real trier, and has come back to racing well,” he explained.

Wright will also ride Lady Mironton reducing her weight to 59 kilograms. Lady Mironton has trialled twice since a break and is ready to fire first-up.

“She has come back fantastic and with the claim is in with not a bad weight,” Carroll said.

Wagga trainer David Heywood is also working towards the Championships with Frenze Hall who will contest the Preview. Heywood feels race fitness and a lighter weight will benefit his runner.

“She drops six kilograms on her last run to 58 kilograms so I expect her to run a big race,” he said.