Hayburner, one of the last progeny of super sire High Chaparral, looks set to complete back-to-back Ballina wins when he steps out over 1605m on Monday.

Murwillumbah trainer Matt Dunn could be in for a top afternoon at the Ballina meeting with his stable providing several key runners in six of the seven races on the program.

Hayburner, in particular, looks hard to beat in the XXXX Gold Class 1 & Maiden Plate (1605m). By former champion sire High Chaparral, Hayburner was bred by Wayne and Carol Twigg from their former good racemare Milady Clang, a winner of 10 races - six of them in Brisbane. 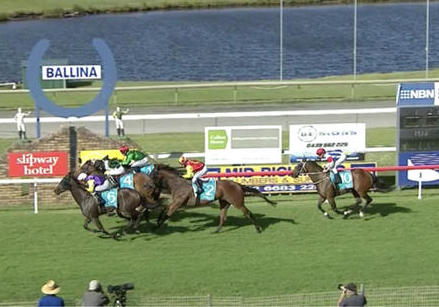 They retained Hayburner after he failed to meet his reserve at the 2017 Magic Millions sale and brought in 11 other co-owners.

The three-year-old colt broke through at his fourth race start in a 1400m Maiden at Ballina last time out on February 4 and will obviously be better suited as his race distances increase.

Bling' N' Bubbles, third to her highly-talented stablemate Snow Valley (with Hayburner second) on debut at Lismore back in August, lines up for her third run this campaign in the Northern Star F&M Maiden Plate (1305m) and looks hard to beat against Monday's opposition.

Dunn has Cinnamon Missile and Keirabella lining up in the Slipway Hotel Class 1 Hcp (1255m), with the former looming as the better hope.

Cinnamon Missile won comfortably over 1200m at Ipswich on debut last May before finishing unplaced at his next starts in a Class 3 and 3YO Class 2 events over 1400m and 1666m.

The Smart Missile four-year-old, who hasn't raced since last June, geared up for his return to racing with a 1000m barrier trial win at Deagon on February 5.

Apprentice Emily Atkinson's 4kg claim aboard Wallander could tip things in his favour over stablemate Ten Taubada's when they line up in the Spill The Beans@Aquis Farm Benchmark 66 Hcp (1305m).

Wallander will carry 57kg after the claim, with Ten Taubada's carrying 60.5kg for senior rider Robbie Fradd. A Rosehill TAB Highway winner four starts back in July, Wallander showed another win wasn't far away with his latest second to Viking Raid in a Ballina Class 2 over1400m on January 18.

The Kris Lees-trained Weigela has been a headache for favourite-backers so far in his career, but should be able to break through for his first win in Monday's C,G&E Maiden Plate (1305m).

The three-year-old has started favourite in five of his past six starts - twice at odds-on - but remains winless after eight starts. But he appears to be up against modest opposition in a small field on Monday and should be able to break through this time.