Call him a trainer, jockey or both – whichever way you look at it Michael Travers has the best seat in the house.

Travers is one of only a few of his kind in New South Wales who has a dual licence to not only train racehorses but also ride them in races.

The 38-year-old will start and also ride two of his own horses at Narrandera on Saturday then follow up with four other rides for other trainers.

Travers is loving the challenge of training and the added bonus of also riding his horses in races places him in very rare territory.

He will be legged aboard his own horses, Decision At Dawn and Faithless, on Saturday then complete his riding engagements before returning home to Wagga to attend to his other horses.

With six horses in training, and riding commitments, Travers is kept on his toes but he wouldn’t have it any other way.

His hands on approach has started to pay dividends with recent wins by Case Closed at Albury on Tuesday and Esatverdi at Gundagai in April. 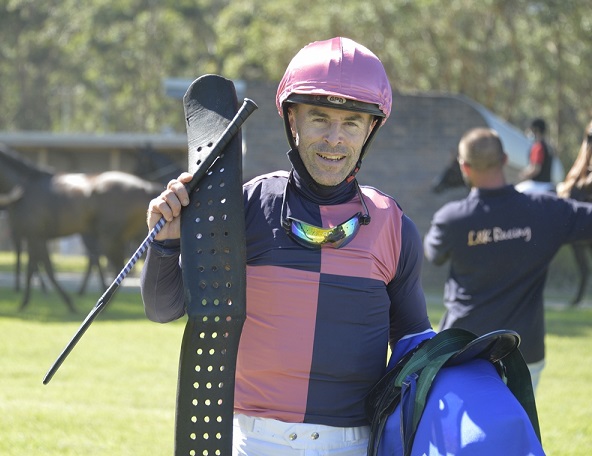 Travers said there was a reason behind his decision to turn to training as he steps into that side of his racing life.

“I started out as a jockey when I was 24 and had finished University. I hadn’t sat on a horse until then,” he said.

“Now my riding career is starting to slow down and I wanted to stay involved as a trainer and so far it has been great.

“It is a lot of work and organising, but I have some good people help me out on race day when it gets hectic and I have a horse in that I train and also I have to ride.”

So how does Travers manage the juggling act?

“It can be difficult because I take the horses to the meeting then have to rely on others to get them ready, ride them then I go back afterwards and finish the horses off,” he said.

“The big advantage training and riding your own horses is you get a good feel for the horse in track work and how it is going in a race.”

And who does he blame if something goes wrong in the race?

“Nobody, I can only blame myself,” he joked.

The long time jockey with over 520 winners to his name from almost 6000 race rides has high hopes he can ride a winner at Narrandera and even better still train a winner for owners Peter Knight and Robyn Tatham.

“My wife Jodie has a share in two of my horses, but Peter and Robyn own the majority,” he said.

“There is a lot of work that goes into it that others don’t see.

“When you have a winner as a trainer and also ride the horse it is very satisfying.”

Travers has varying opinions on the chances of his runners believing Decision At Dawn is a chance, while Faithless will need to improve to win.

“Decision At Dawn has shown a lot at home, but not at the races while Faithless is running out of chances,” he said.

“We are still learning about Decision At Dawn who was bought for only $500 so we hope she can win a race or two.”

Decision At Dawn has raced once and Faithless four times for Travers, while Case Closed was having just her fourth start for him on Monday.

His patience was rewarded on Monday and the jockey turned trainers hopes that will be the case again at Narrandera – a track which holds plenty of memories for the jockey.

All the fields, form and replays for Saturday's Narrandera