Coffs Harbour Will Be A Sea Of Pink Next Sunday

Pink will be in vogue at Coffs Harbour next Sunday when the Club stages it’s 13th annual Pink Silks Raceday.

The day raises funds for Pink Silks Trust who assists local women’s health organisation with equipment and services, as well as contributing to national research foundations, with the Trust having raised well over $750,000 from previous racedays. 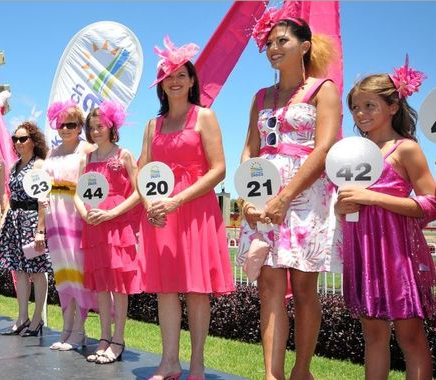 “We will have live music, jumping castles and a face painter for the children,” said Coffs Harbour Racing Club's racing manager, Tim Saladine.

“The Fashions on the Field has a ‘Pink’ dress code and includes kids’ categories, raffles and pink silks merchandise.

“There will also be a special luncheon with tickets available by going to our website (coffsracingclub.com.au) with a live charity auction at 5:45pm, and local Owen Shannon performing after the final race.”

It will be free entry to Kempsey Race Club’s program tomorrow: “We will have children’s rides and plenty of giveaways,” said KRC’s secretary/manager, John Graham.

“We usually get a decent-sized crowd with a stack of holidaymakers heading to the raceday.”

The overall winner of the series – running from October 2018 through to August 2019 – will receive $12,000, which is divided evenly between the trainer and the owners.

“We have had the Stayers Series up and running for a few years now and it continues to build in stature,” said MTC’s chief executive, Scott Sanbrook.

Queanbeyan Racing Club has two January meetings, the first next Saturday is the Publicans’ Purse Raceday with many of the local hotels sponsoring a race.

Main event is the Statesman Hotel Publicans’ Purse, having first been run in 1860 when a two-mile handicap with prizemoney of 15 pounds.

“This year it is a $12,00 Benchmark 50 Handicap over 1460m, so things have changed a bit since then,” remarked QRC’s CEO, Brendan Comyn. “We expect a good crowd and will have face painting and other kids’ activities all free.

“Then our Australia Day meeting will be an even bigger day as many of the coastal holiday crowd are back in town ready for a return to work. The main race is the Laterals GLP Bungendore Cup and the day is ‘Country Cups’ day with all races named after neighbouring towns.

“There will be a Fashions on the Field with an Aussie theme, so patrons are encouraged to come as an Aussie Icon such as Dame Nellie Melba, Merv Hughes, Winx, Dame Edna or Crocodile Dundee!

“There’s great prizes with an Aussie theme for best dressed Little Tacker (child under 12yo), sheila or bloke. Come along to be part of the fun. We will have free live entertainment on course with a Karaoke artist, jumping castles and icy poles for the kids.”