Christmas comes early to many NSW racetracks with Tuncurry-Forster Jockey Club kicking off a big three weeks with its Christmas Party Raceday tomorrow.

“We have a lot of business booked for the Christmas party but in saying that, there’s still seats in the Pavilion and a few Gazebos available,” said Garry McQuillan, TFJC’s president. 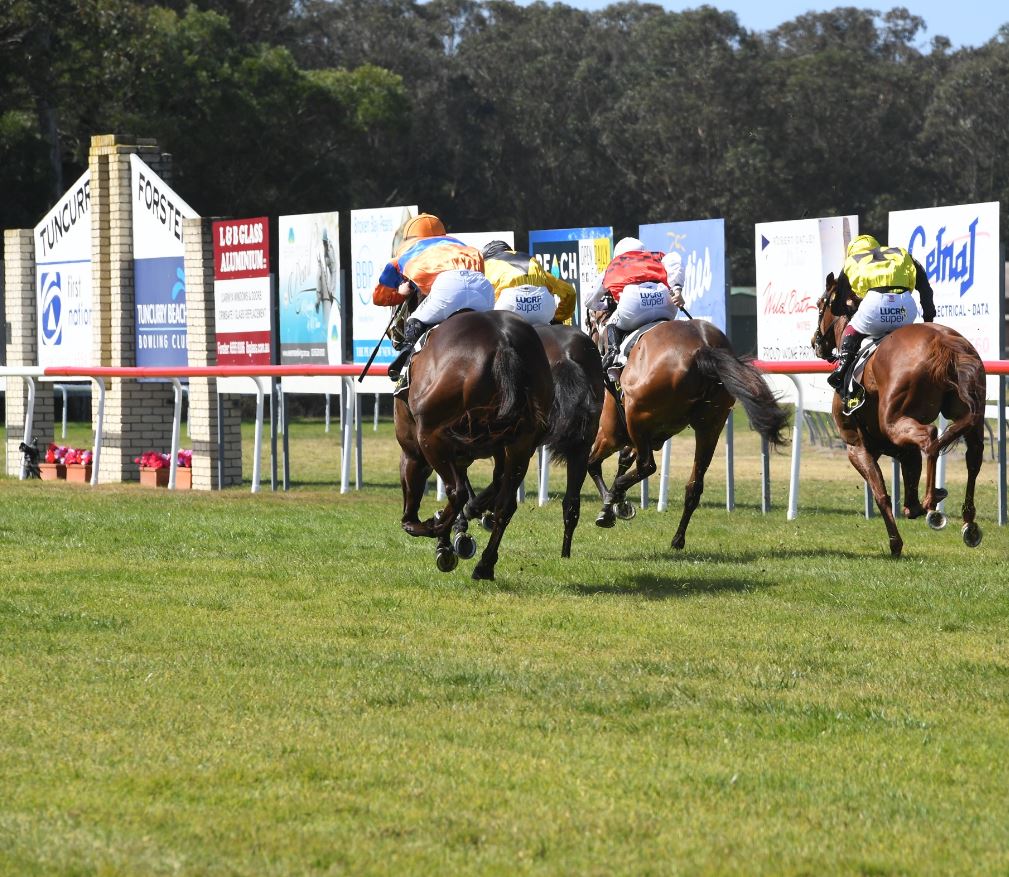 There will be a good-sized crowd watching great racing action at Tuncurry on Monday. Image by Steve Hart Photographics

“We are expecting a good crowd as usual with gates opening at midday and free buses running.

“It’s a seven-race TAB meeting with plenty of cold refreshments and food available.”

Murrumbidgee Turf Club (Wagga) hosts the Ted Ryder Prelude Raceday on Tuesday with the winner of this race exempt from the ballot for the Ted Ryder cup a few weeks later.

MTC’s CEO, Steven Keene, said: “Trainers will be keen to win this important lead-up to the Ted Ryder Cup and the extra prizemoney will draw a great field.”

MTC looks forward to bringing in Christmas with style on Christmas Eve with the Ted Ryder Cup program on what is traditionally one of the great days on the Wagga racing calendar.

“With the prestigious Ted Ryder Cup and a heat of the stayers’ series, the quality racing will make sure the Christmas cheer carries on long into the festive season,” said Keene.

“Everyone will be relaxed and in holiday mode, so we look forward to a strong crowd again for the Ted Ryder Cup.”

Moree Race Club will host a monster crowd next Saturday with the Brooker Trading Co Moree twilight races. MRC tried something different at their twilight races last year and it paid off handsomely.

“It was the first time we utilised the ‘Inside the Rail’ last year and it turned out a great success,” said MRC’s secretary, Michelle Gobbert.

“We expect another big crowd – somewhere around 4,500-5,000 – as we had last year. It was an amazing day’s racing. We get a massive influx of people into the town for the raceday.

“There is a fantastic Fashions on the Field by Bella Santé with $3000 in prizes on offer and sponsorship packages are still available for the centre of the track.

“We have six races on the day with a courtesy bus running to and from the course and the Troy Kemp Band playing from 6pm.”

“We will have Christmas Party hospitality options and themes, along with free kids’ activities with Santa Claus on track. There will also be a live band after the last and free entry,” said SCR’s CEO, Heath Courtney.

On Saturday 28 we have the ‘Come as you like’ Raceday which is Scone’s only weekend race meeting outside of carnival time.

“Get the family out of the house following Christmas and treat yourself to TAB’s new on-track Venue Mode specials with high-quality Saturday racing,” said Courtney. “There will also be kids’ activities along with free entry.”

Nature's A Force As Carnival Contenders Get Thumbs Up

By Ray Hickson Tips and race by race preview by Ray Hickson for Wednesday’s meeting at Canterbury. Selections based on ...
Read More

By Ray Hickson Trainers Tash Burleigh and Mitchell Beer have thought about nothing but the Country Championships for quite some ...
Read More

By Neil Evans Early Good 4 rating likely to drop to around Soft 5/6 with rain forecast, and rail out ...
Read More

Please be advised of the following welfare inquiries that have recently been completed by Racing NSW Stewards. 1. Ballesteros – ...
Read More