By Julieanne Horsman at Goulburn Racecourse

Young Goulburn trainer Tash Burleigh is laughing all the way to Royal Randwick after scoring the quinella in the $150,000 SERA Country Championships qualifier. She pulled off a serious upset at her home track this afternoon, with Al Mah Haha (Richard Bensley) flashing up the centre to trump stablemate Bocelli (Shaun Guymer.)

“We were pretty deep all the way, probably no closer than four deep, and from the 600m he travelled up really well and I just had to wait, wait and wait,” Bensley said. “When I finally let him rip he quickened and it was a very tough win. These races are hard to win and it’s a privilege to be part of it.”

Tash also had Napoli finish 9th in the race didn’t know where to look as they thundered towards the cheering crowd.

Despite the odds – Al Mah Haha was $26 and Bocelli $18 – Tash was confident the pair would figure in the finish. 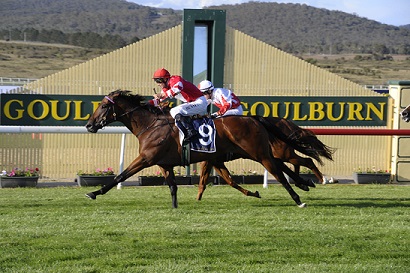 “After the barrier draw we knew this was going to be anyone’s race and with my horses carrying 56kg I thought they were a good chance.”

Al Mah Haha will have a another run between now and the $500,000 Newhaven Park Country Championships Final at Royal Randwick on 6th April while Bocelli will be kept fresh.

Al Mah Haha started his career with Chris Waller in Sydney and joined Tash’s stable last Winter. The gelding’s owners have enjoyed success with Fireman Sam I Am and Tash jumped at the chance to have Al Mah Haha in her care.

Race favourite Noble Boy ran a gallant fourth behind Supreme Polarity. Despite having missed out on out qualifying for the final today, he remains favourite for the $500,000 race. While disappointed with the result, trainer Todd Blowes was full of praise of for Tash and her team. He believes Noble Boy didn’t appreciate the firmer track and plans to take the talented to gelding to Wild Card if he pulls up well and the track at Muswellbrook receives some rain between now and Sunday, 24th March. Joe Ible has already indicated his interest in the wildcard qualifier with Seeblume. The mare ran out of her skin to finish fifth at big odds.

Check out the replays from all eight races at Goulburn today.