By Julieanne Horsman at Albury Racecourse

Donna Scott only renewed her training licence 12 months ago after taking a break in 2012 but her first year back will go down as one to remember thanks to family horse Bennelong Dancer. The talented five-year-old mare has come back better than ever and made her presence felt with an eye-catching three-length win against a classy field in today’s $150,000 Southern Districts Country Championships Qualifier. 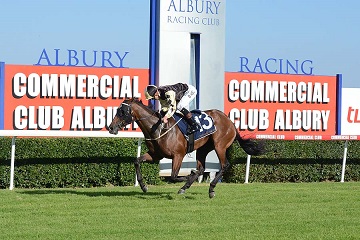 “We had done everything we could and she had been spot on for a month coming into the race so it was just up to her and thank god it came off!”

Bennelong Dancer jumped well and Jockey Blaike McDougall guided her into nice spot three-wide with cover and the well-fancied Forever Newyork on his inside.

“My plan was to give her a bit of room from the 500m and I knew once I got her into the clear she’d do the rest,” he said. “She travelled well through the run and she had me feeling really confident. The win meant the world and I got a bit soft in the voice doing the interview with Sky afterwards.”

$17 chance Lady Mironton, trained by Wayne Carroll and ridden by Simon Miller, finished second and also booked a place in the $500,000 Newhaven Park Country Championships Final at Royal Randwick on Saturday, 6th April. Forever Newyork was third and will step in if either Bennelong Dancer or Lady Mironton are unavailable.

Bennelong Dancer is the first horse since the inception of The Championships to qualify for the final two years in a row. After All That has run in two finals but only got into the first one by default after the original qualifying horse was scratched. Blaike, who has ridden Bennelong Dancer in all but one of her wins, says she has really come on since last year. 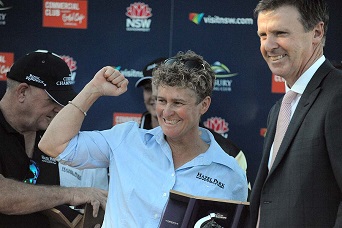 “She feels a lot stronger, her work is really sharp,” he said. “The trip to Sydney on the big day and having the extra preparations under her belt has seasoned her.”

Donna and her family bought Bennelong Dancer as a yearling for a tick over $30,000. With her Country Championships prizemoney, the mare’s earnings now total in excess of $180,000. Donna doesn’t have any concrete plans between now and the final, rather she will wait and see how Bennelong Dancer pulls up from today’s effort.

“She goes well fresh so we won’t have to do much with her anyway,” Donna said.

For now, it’s off to celebrate with her nearest and dearest.

“It’s going to be a very long, very big night!”

The Country Championships head to Goulburn next Saturday for the South Eastern Region Qualifier. The Central Districts Qualifier is at Mudgee on Sunday.

Check out the replays from all eight races at Albury today.