Beer The Toast Of Albury As Mare Finds Her Calling

By Julieanne Horsman at Albury Racecourse

Rising young trainer Mitchell Beer doesn’t do things by halves. At Albury today he made his first attempt at qualifying a horse for the Country Championships and had a red-hot crack with six runners or 37.5% of the field.

All along he has maintained four-year-old Domesday mare Sky Call was his best chance and she didn’t make a liar out of him. Under the guidance of apprentice jockey Teodore Nugent she overcame a wide draw, powering home from the back to win the $150,000 Southern Districts heat and book a spot in the $500,000 Newhaven Park Country Championships Final at Royal Randwick on Saturday, 4th April.

“When the barriers came out Thursday morning I was sick,” Beer said. “But class prevailed, Teo gave her a 10/10 ride and the whole team have done an outstanding job.

“This horse had strong city form leading into the race and the way she won today from a bad barrier was reassuring. She won pretty dominantly and beat a very sharp horse. She is a massive chance leading into the final.” 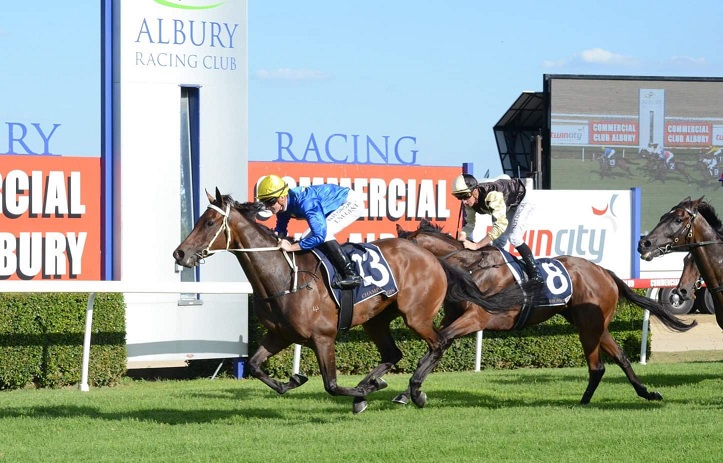 Today’s victory was a special one giving Beer the chance to repay one of his biggest supporters, Sky Call’s owner Steve Watkins.

“He’s backed me from day one since I went out on my own and I couldn’t think of a better person to win it for,” Beer said. “We’ve had a roller coaster of ups and downs and he has stuck by my side endlessly.”

“I’m over the moon,” trainer Donna Scott said. “It feels like we won anyway. It was great to see her return to form. There were a lot of doubters who didn’t believe she could do it again and even we were worried her best was behind her, but she proved us all wrong today. It’s great to get another guernsey.”

The result was a win for Albury too with both qualifying horses trained locally. As the winning trainers congratulated each other, Beer jokingly asked Scott for a lift to Sydney.

“He can have a lift if he wants to,” Scott said with a laugh. “When Mitch first moved to Albury he had his horses at my stables until he sorted out his own and his sister was apprenticed to me. We will be working together towards the final, that’s for sure.”

Being one of the earlier heats, the challenge now is how best to prepare the horses for the final in six week’s time. Mitchell has other things on mind right now though.

“I’m going to have 47 beers tonight and will worry about the rest on Monday!”