Apprentice Qin Yong Back From China And In-Form

Qin Yong has resurrected his Australian riding career and is off and running.

The mature age Hawkesbury apprentice rode his first winner of the new season at Parkes on Saturday to take his Australian tally to 29.

He scored on four-year-old Hinchinbrook mare Miss Leah ($3 joint favourite) in the Maiden Handicap (800m) for trainer Mark Schmetzer at the non-TAB meeting. 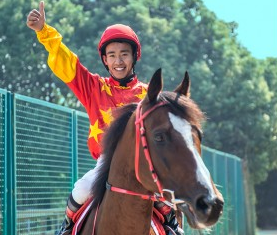 Qin Yong [pictured left] rode 16 winners in 2017/18 and had tallied a further 12 winners in the first half of last season when he had to return to his native China earlier this year to secure a visa to continue his local career.

The young jockey’s master, leading Hawkesbury trainer Brad Widdup, was delighted to see his apprentice regain winning form yesterday and is confident he can build winning momentum with further opportunities.

“Qin Yong is working very hard, and is determined to succeed,” Widdup said. "He has been travelling to many places around the State, and it was great to see him break through again.

“He has no weight issues and could ride comfortably at 52kg in a stock saddle.”

Whilst Qin Yong claimed 2kg on his Parkes winner, he is by no means an inexperienced rider. He rode successfully in both China and Barbados before coming to Australia two years ago when Widdup agreed to a request from RacingNSW to join his stable when he took out his training licence.

Qin Yong gained notoriety in 2015 in his homeland when he secured his Hubei Province their first ever gold medal at the 10th Chinese Traditional Games of ethnic minorities, winning the 2000m Ulanqab Cup on China Horse Club’s Endzone by 10 lengths.

The following year he also became the first Mainland China jockey to ride a winner outside Asia when successful at the Sandy Lane Gold Cup meeting in Barbados, one of the biggest on the island nation.