First season apprentice Madeline Owen, on loan from Peter Robl at Randwick to Brett Cavanough at Scone, could have no finer education or inspiration as she rides two runners for an incredibly accomplished training and riding mum at Saturday’s Kempsey TAB meeting.

Karen Owen, training and breeding thoroughbred and eventing horses on a picturesque property outside of Taree with her veterinarian husband Adrian, in 2012 rode for the Queen and the late Prince Philip at the Diamond Jubilee in London. 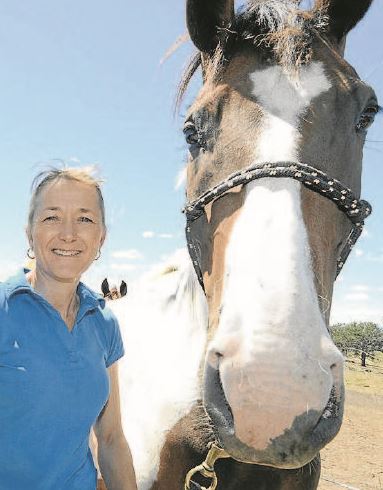 Karen was awarded an Australia Day Medal in 2014 for her 30-plus years’ service as a Sydney Mounted Police Sergeant and senior riding instructor.  She also rode at the 2005 and 2010 Edinburgh Military Tattoos.

“We have ten in work and our eventing horses; I still ride trackwork and compete in eventing and Madeline has my passions," Karen enthused.

"She’s still learning obviously but the confidence and determination to succeed are there and she’s ridden a winner for us."

Madeline has four rides at the six-race Kempsey TAB meeting.

“At 19 she’s starting to get the opportunities and the 15 months she spent in Sydney with Peter was so important because she rode in so many barrier trials and jumps-outs against the top Sydney jockeys.

“And Peter through his long riding career had to be a good educator for any young apprentice. Peter rode a lot for Brett that was the contact for Madeline.”

On Saturday Madeline claims 4.5kg on Karen’s last start winner, Nothing is Easy significantly on a heavy track at Kempsey.  Saturdays’ track at present is rated a soft 7.

“He’s up in grade from a non-TAB here but drawing the rails on this tight and turning track is a big advantage, he’ll handle the going so can be competitive.”

And Karen says so can Burn’m, a last-start second at the same non-TAB, contesting the Greater Northern Gladstone Cup 1900m for Madeline.

Nothing is Easy, who contests the Peter Ball Class 1 (1450m) is destined for an active retirement.

“With his temperament and attitude, he’ll make an ideal Mounted Police horse, I’ll take him down soon.

“I keep in regular touch with the Redfern base and the barracks. So many friends there and I still do some instructing when I can find time at Centennial Park and the Barracks.”

And Karen’s expanded on a lifetime experience of meeting the Queen and Prince Philip in London.

“They were just so lovely and complimentary. We brought our own saddles and gear over and in our Mounted Police uniforms rode their Household Cavalry horses.

“Her Majesty said we rode them ‘lovely and a pleasure to watch us’. The Prince, an experienced polo rider known for his wit and sense of humour, noticed a leg bandage had come loose on one of the other horses.

"He said: ‘We can see how well they ride; can they teach you how to bandage a horse?'"

Karen also represented Australia at eventing in New Zealand. So, after all the marvellous experiences and memories, it’s racing business as usual for a doting and accomplished mum and an ambitious daughter at Saturday’s Kempsey TAB meeting.