Burleigh Counting On 'Nines' To Keep Her Good Numbers Going

With four winners and two minor placings from her past eight runners, Goulburn trainer Tash Burleigh has sure found an autumn hot spot.

The progressive To The Nines has been part of those recent results and looks a genuine fast learner. 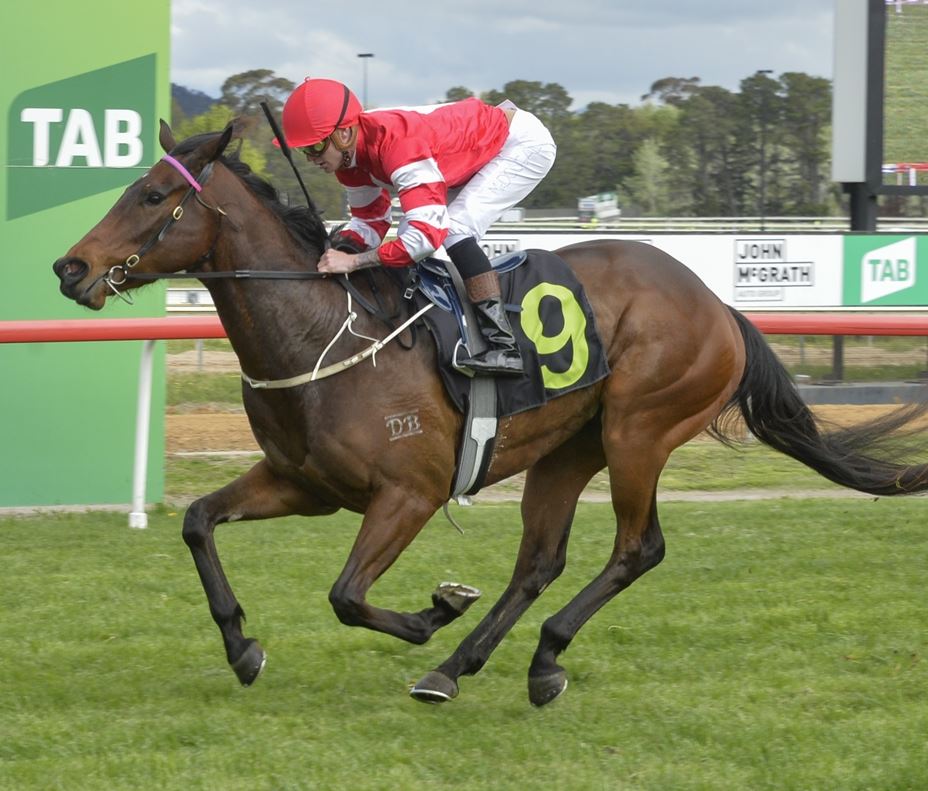 To The Nines (Blaike McDougall) in winning form at Canberra. Image by Bradley Photographers

The Epaulette three-year-old has shown an early knack for converting canter to coin in just four starts and his trainer is excited about what he's delivered so far.

"He is a lovely young horse and nice to have around; he is still putting it together and can get a little worked up," Burleigh offered.

"I've always thought he would be a nice horse with some maturity on his side and he shows that with the progression of his runs."

The gelding contests the Goulburn Marketplace Class Two Handicap (1200m) on Tuesday that his trainer has earmarked as a suitable target.

"He's up to 1200m with a lot more fitness on his side as opposed to his first-up run a couple of starts back.

"He should go there Tuesday and show some good gumption."

Despite To The Nines ($2.80 favourite on TAB) finding a competitive little race on his home track, Burleigh feels he's certainly up to the challenge.

"There are a few horses in the race with nice form for where he is at and we are excited to see how he goes against them on Tuesday.

"He has placed against some horses who have won up to five races, so with a decent run he should be in the right place on the finish line."

Burleigh had a Saturday option with To The Nines over the weekend but instead has opted for 'the road less travelled' on her home patch.

"The latest TAB Highway could have been an exciting race for him had he not drawn a wide barrier."

To The Nines did what few gallopers do by kick-starting his career with a dominant debut win in the spring at Canberra. Since then the galloper has held his form through another three contests over summer and autumn.

Burleigh says it's still wait and see with an inexperienced horse like him but the stable is bullish about where to after this week: "We will see how he goes on Tuesday and hopefully be making a trip or two with him to Sydney in the near future."

To The Nines races in the same colours that have brought the stable success with renowned tough guy and 2020 Goulburn Cup winner Al Mah Haha, an association Burleigh is thrilled to see continue with this horse.

"The managing owner, John and his son-in-law Anthony have shares in Al Mah Haha and are in this horse along with former Wallaby Nick Farr-Jones," Tash said.

"There are a couple of other horses they have bred that we have in the stable and John has recently added a nice Sooboog yearling colt to the team as well. They have been solid supporters for almost five years that I have been training and I'm thrilled their horses are giving them great results."

Other locals with competitive offerings on the Goulburn card include Kurt Goldman with Underground Music ($16) in Race 3, Emma & Lucy Longmire with Salute To The Sun ($9 into $7.50) in Race 5 and Sue Laughton with Vee Eight ($4.20) in Race 7.

Goulburn's track is currently rated a Good 4 with ideal autumn racing weather expected in the tablelands this week.