Grafton-trained galloper Moringa’s Amordoro is still learning the racing caper at five years of age, but on facts and figures that won’t prevent him from being a force at Grafton on Thursday.

Moringa’s Amordoro has raced three times at Grafton for a win, second and a third and will start as one of the favourites along with Hallowed Dreams for the Calcuttas at the GDSC Class 1 (1181m).

The race topweight with 58.5kg has drawn wide in gate 11 with only the consistent Canexcell positioned outside of him at the start. This may suit Moringa’s Amordoro who appeared not to be suited by the inside draw when third at Grafton on March 29. 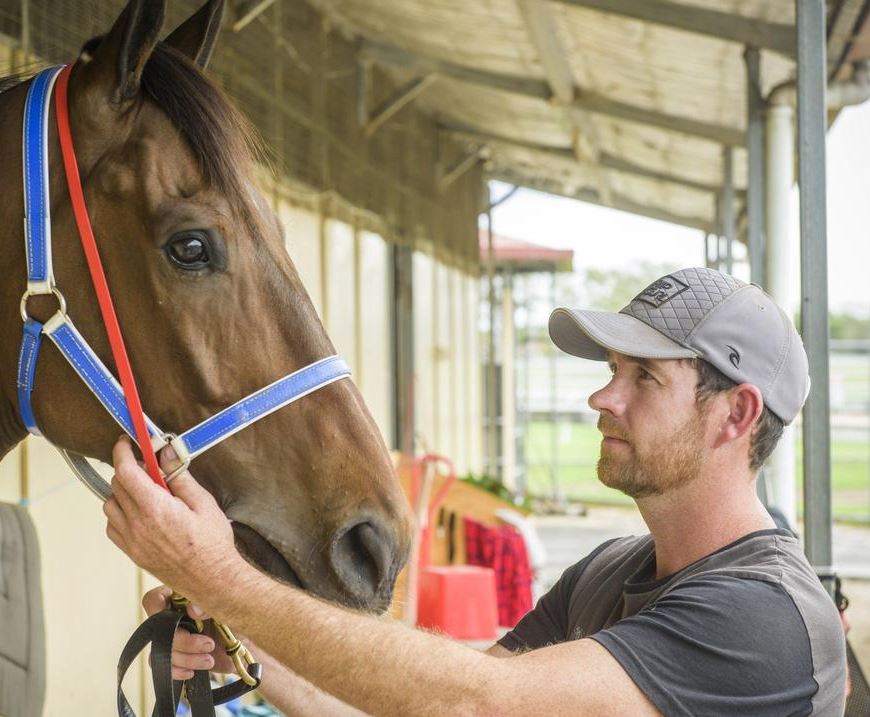 Hallowed Dreams finished second in the same race and looms as the obvious danger after also winning his maiden at Grafton. Grafton trainer Shane Everson said Moringa’s Amordoro could be his own worst enemy in his races and he was hopeful of the big gelding being more tractable on Thursday.

“He has always been a bit of a problem child. He is so big and can do things wrong and I’m just hoping he can improve his manners with racing,” he said. “He is a big guy and he knows it and that has got him into trouble.

“He has already put my daughter and stable apprentice into hospital in separate incidents so he can be fairly full-on.”

Jockey Raymond Spokes will again have the task on Moringa’s Amordoro after being aboard in his three starts at Grafton. The galloper won on debut on August 31 after two trials victories then finished second before returning from a break with a third on March 29.

Everson feels there is more improvement fitness-wise from his galloper.

“He was a little underdone first-up and will have improved in fitness for Thursday,” he suggested. “The horse has got a lot of ability and once he works out what he is doing he will be a serious horse.

“He might be a five-year-old, but he is more like a two-year-old the way he is in the head.”

Moringa’s Amordoro is well suited to racing at his home track where he knows the surroundings which is why Everson has been content to give him all of his starts where he is trained every day.

Spokes knows the quirks of the galloper and will have him out of harm’s way and within striking distance of the leaders in the straight.

Moringa’s Amordoro is raced by Peter, Helen and Kathy Moran along with Peter Eather and Everson.

“The owners always give their horses plenty of time and this guy needed it after a few setbacks,” Everson said. “He missed a bit of work with the rain before his first run back and with the benefit of that he will be a lot better.”

The trainer works around 12 horses at present and has been experiencing a strong run of success with recent wins at Grafton with Memphis Squaw and Moringa’s Hiemie. He has also had several placings in recent months including seconds with his past three starters at Coffs Harbour and Lismore.

“We have been having a good run with a few winners. Moringa’s Amordoro is my only starter on Thursday and if he stays out of trouble I’m sure he will be in the finish,” he said.

The six-race program commences at 1.35pm with the course rated a Soft 5.