It has been a memorable past month for trainer Warren Gavenlock as he gets back to business with Saintly Sunrise at Coffs Harbour on Monday.

The impressive last start winner is Gavenlock’s only starter for the day in the Doug McLeod Memorial Class 3 (1615m). 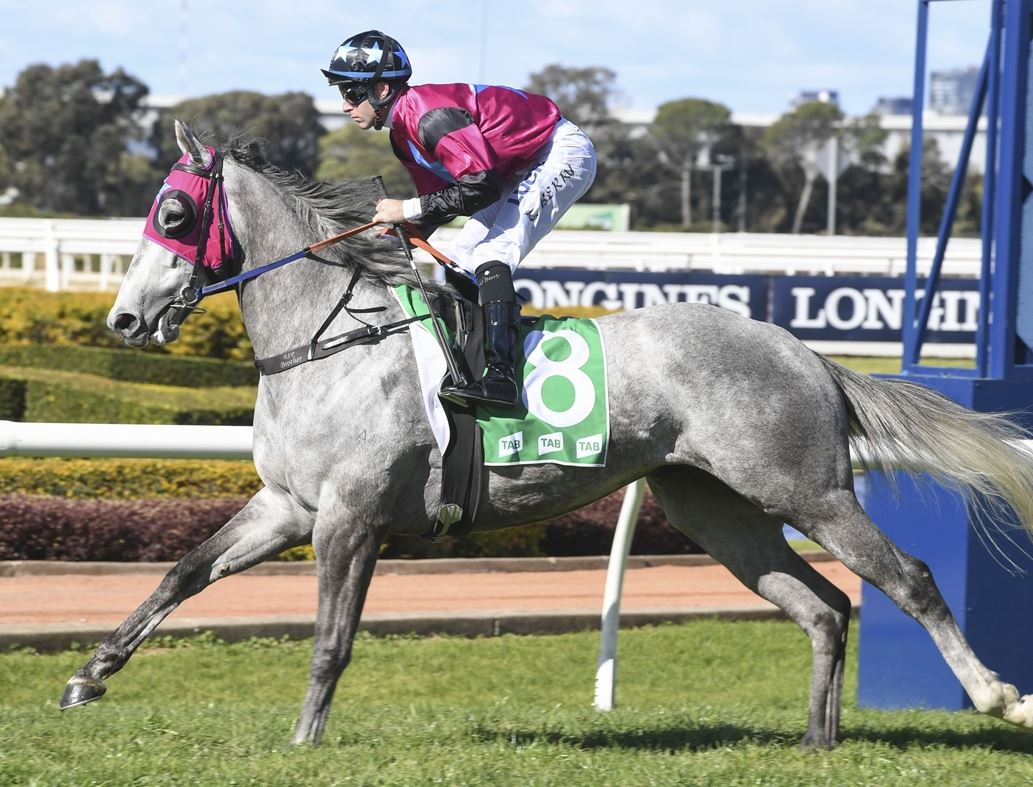 Saintly Sunrise (Tommy Berry) heads to the barriers when trained in Sydney. Image by Bradley Photographers

Gavenlock has just come off a Country Championships campaign with stable star Plonka which won the Muswellbrook Wild Card and then finished sixth behind Art Cadeau in the final at Randwick.

Plonka has been a major part of Gavenlock’s success in recent times with the trainer’s past six starters producing three winners.

Saintly Sunrise was one of those winners on a heavy track at Coffs Harbour on April 1 when the grey charged through under the persistent riding of jockey Matthew McGuren to win as he liked by almost three lengths.

It’s highly likely he will meet similar track conditions again with rain already having the track in a heavy state and more is forecast in the lead-up to the meeting.

With the added pressure and excitement gone from the build-up to the Country Championships decider, Gavenlock is hopeful his stable’s recent run of winners can continue.

“I hope it keeps going. We have been getting a few winners and just have to maintain it,” he said.

The 63-year-old is working 15 horses at Coffs Harbour and believes Saintly Sunrise is on the improve after taking a while to find his way.

“He was with Peter Snowden in Sydney and then Ciaron Maher before he came to me and it took him a while to win a race,” he said.

“Obviously the easier class in the country has helped him, but he has also come back better since having a bone chip removed from one of his knees. He is racing consistently as his form shows with a win, second and third from his past three starts.”

Saintly Sunrise will again have McGuren in the saddle and Gavelock feels this will be an asset as the galloper takes some hard riding to get the best from him.

“He only has a sprint of about 150 metres and you have to keep at him,” Gavenlock said. “If it was any other jockey they may have given up on Saintly Sunrise last time, but I told Matt to keep at him and he would find and that is what happened."

Saintly Sunrise won over 1415m at Coffs Harbour with 59kg and on Monday will carry 1kg less. Gavenlock believes Saintly Sunrise has a lot in his favour providing he races in the same manner as he did last start.

“He is up in grade, but he races well at home where he is trained on the track and the sting out of the surface doesn’t bother him,” he said. “He normally dawdles out of the gates and gets back a bit and I expect him to be ridden the same way on Monday.”

Saintly Sunrise is raced by Gavenlocks wife, Susan, as well as Plonka’s owner, Peter Colley, Lustre Lodge Thoroughbreds and Cameron Shepherd. Gavenlock hasn’t only won with Saintly Sunrise and Plonka in recent times, but also Furphy with McGuren aboard at Coffs Harbour on March 8.

Saintly Sunrise ran second at the same meeting on a heavy track before winning his latest start.

Coffs Harbour chief executive Tim Saladine said with a lot of rain in the area in recent times the tracks haven’t had a chance to dry out.

“The track is going to be heavy again (currently a Heavy 8) and there is more rain forecast over the weekend. It has been hard to keep meetings on, but hopefully, we will be right for Monday,” he said.

Leading trainer Kris Lees will have four starters with possibly his best chance being Free Dawn in the Lindsay Jacobs Memorial Class 1 (1012m).

Gold Coast trainer Kacy Fogden will also have her first starters at Coffs Harbour with three starters including debutante Larne Court which has shown potential in his trials.