A four-year-old son of Reset out of the Desert King mare Black Sea Lady, Sea Raider ($4.20 favourite on TAB) was snapped up by Gilmore for only $10,000 at the 2018 Magic Millions National Sale on the Gold Coast.

Gilmore has been training on the Gold Coast on and off for more than 30 years, but also had stints based in Macau and China before returning home in 2016. 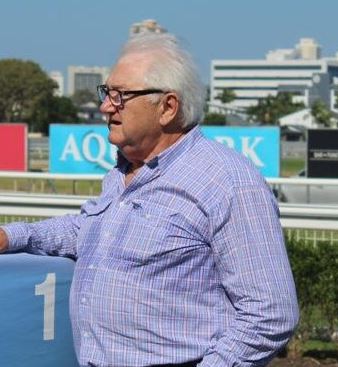 Sea Raider is raced by several members of the Gilmore family and their friends who have been on a great ride with the gelding who so far has won six of his 14 starts and collected just over $108,000 in prizemoney.

"He was not very big but he was very well put-together when I saw him at the sale and I thought he was a bargain at $10,000, which is nothing really for a racehorse these days," said Gilmore.

"He just needed a bit of time before he was ready to race, but he has done a fantastic job in the past 12 months, winning six of 14 and he's probably been a bit unlucky not to have won a couple more.

"He is raced by my son and his wife, a couple of the grandkids and some family friends and many of them are also in the ownership of Happy Go Plucky, so they have been having a great run."

Gilmore's Happy Go Plucky won his ninth race and took his career earnings to just short of $300,000 when successful at Doomben on January 7.

Sea Raider kicked off his racing career just on 12 months ago, winning on debut at the Gold Coast last January and has continued to improve. He won four of his first six starts, then won again first-up when he resumed in October.

"In a couple of his earlier unplaced runs this prep he got caught racing on the inside, which he just doesn't like at all, " said Gilmore. "But he's showed at Eagle Farm at his past two runs that he's ready to run a huge race on Friday.

"I've always had the Ballina Cup in mind for him this prep and I couldn't be happier with him going into the race. His work on Tuesday was good and he is unbeaten in soft ground, so it will be another bonus if the Ballina track stays in the soft range.

The Ballina track on Thursday lunchtime is rated a Good 4. Sea Raider has been effective in all ground, but is unbeaten in four runs on rain-affected tracks - two on soft surfaces and two in heavy going.

Gilmore's one slight concern is Sea Raider's awkward gate (barrier 12) in the 14-horse field, but he is confident the gelding has the gate speed to take up a handy position on settling.

Jockey Ryan Maloney has partnered Sea Raider at his past two runs in Brisbane but, with heavy commitments at Saturday's rich Magic Millions meeting on the Gold Coast, he won't be riding at Ballina. Gilmore has booked Luke Rolls to partner Sea Raider for the first time.

"I had quite a few calls from jockeys chasing the ride, but Luke has done a lot of riding for me and I'm happy to have him on board," said the trainer. "The alley is a bit tricky, but the horse has good gate speed to go forward and take up a handy spot."

Sea Raider is likely to fight out Ballina Cup favouritism with the Matt Dunn-trained Penshurst ($4.80) who dashed away first-up to land the Ballina Cup Prelude (1550m) at Murwillumbah on December 27.

That was the former French galloper's best performance in his five starts for the Dunn stable after doing his earlier Australian racing with Warwick Farm trainer Matt Smith.

Melted Moments, now back with Armidale trainer Paul Grills, will start at big odds again on Friday, but he does go into the race boasting three wins from his four previous appearances at Ballina.