Bathurst is almost a second home for Eleanor Webster-Hawes and the Cowra-based jockey is looking forward to riding at the Bathurst Cup meeting on Sunday 27 September at Tyers Park.

A valued trackwork rider at Cowra for trainers Andrew Molloy, Michael Lynch and Kathryn Cahill, Eleanor also travels three times a week to ride work at Bathurst for Dean Mirfin and the father-son trainer partnership of Don and Andrew Ryan. 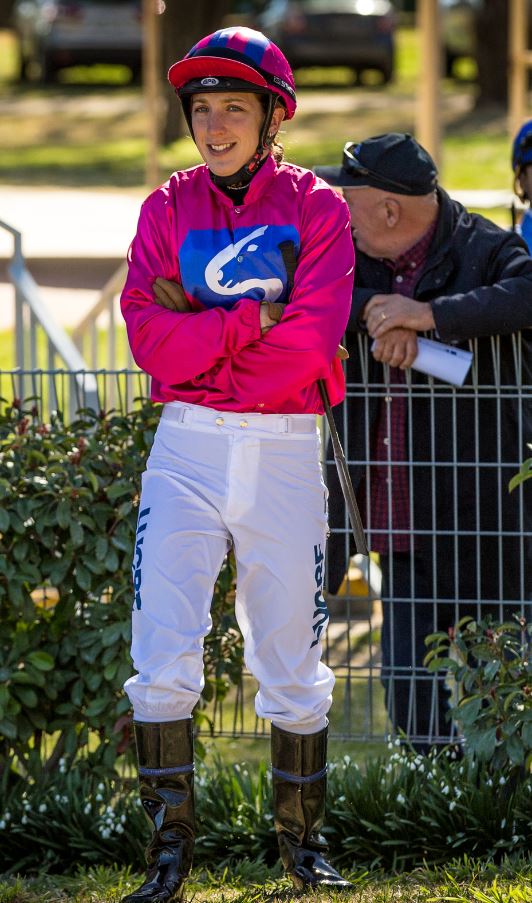 Somehow, Eleanor finds time for study at Charles Sturt University at Bathurst where she is halfway through a three-year course to qualify as a paramedic, and of course, there are race meetings to ride at over a wide area of NSW!

Eleanor Webster-Hawes has ridden 104 winners including success in some major races but there was not overly much in her family background to suggest a career as a jockey.

Her mother, Anastasia Webster-Hawes is an ordained Anglican priest now serving at Denman after a previous 8-year term in Blayney while her father, Donald Hawes was a draftsman working at the mines in Broken Hill and then, before retirement, an Industrial Arts teacher.

In the 140-year history of the Blayney Parish, Anastasia Webster-Hawes in 2011 became the first female Rector to be appointed and with husband Donald doing a lot of voluntary work in the area they became very popular.

Of the 8 children in her family, Eleanor was the only one interested in horse sports and she attributes her involvement to her grandfather, the late Ray Webster.

“Grandad was a great horseman and stockman who rode at rodeos and he had me riding by the time I was about three years old,“ Eleanor revealed.

“I was mainly interested in educating horses but eventually did a TAFE course run by trainer Joan Pracey and began riding trackwork in the Hawkesbury area at Agnes Banks,“ she added.

Gaining an apprenticeship at Dubbo, Eleanor joined the Peter Nestor stable where David Pisani, Kody Nestor and Jake Pracey-Holmes were the other apprentices at the time (other successful apprentices tutored by Peter Nestor have included Kathy O’Hara, Tracy O’Hara and Chris Williams).

Eleanor’s first winner was Atomic Food for local trainer Mick Cox at Coonabarabran, however, with so much competition for rides at Dubbo, she began making long trips to the far west to get mounts at Cobar, Broken Hill, Enngonia, Louth, Pooncarie and to Cunnamulla in south-west Queensland.

“Wayne Prisk, a trainer at Cobar, was a staunch supporter and regularly supplied me with mounts at the remote area meetings,” she recalled.

Parts of her apprenticeship were later served with, Dean Mirfin, Don and Andrew Ryan and Kathryn Cahill, the sister of champion jockey Mathew Cahill.

“Mathew has played a big role in improving my race riding with his advice but I still enjoy occasionally beating him home in a race including a recent close photo finish,“ said Eleanor with a chuckle when referring to her long time partner.

Highlights so far for Eleanor include winning the $150,000 Country Championships Qualifier at Mudgee on Cosmologist for owner Ross Williams and trainer Dean Mirfin. A brave ride by Eleanor Webster-Hawes saw her steer the $51 outsider ($160 on TAB) through torrential rain to a memorable victory.

Owned by Steven and Karen Deal and partners from Bathurst, the Dean Mirfin-trained Worldly Pleasure became the first Metropolitan winner for Eleanor when successful at Canterbury Park.

“Worldly Pleasure is a joy to ride and I was so pleased to see her judged as the Central Districts Horse Of The Year after her numerous other wins were taken into account,“ Eleanor commented.

At the other Sydney tracks Warwick Farm, Royal Randwick and Rosehill Gardens she has also ridden the placegetters, Cosmologist, Ave and Somebody. Ave and Somebody were trained by Don and Andrew Ryan and raced by the Ryan family for whom Eleanor has ridden plenty of winners.

“During my apprenticeship with them and now as a senior jockey the Ryans have always treated me like one of the family and have been wonderful supporters and friends,” said Eleanor Webster-Hawes.

Meanwhile, at Cowra, Eleanor has a great relationship with trainer Andrew Molloy and his family and recently had a thrilling win at Wellington on the speedster Just A Flash which is trained by Andrew for Peter Evans from Orange.

“Just A Flash is probably the fastest horse I have ridden and despite the outside barrier at Wellington amazed me with how easily he found the early lead against a field of very smart sprinters and then held on so well to beat the favourite Emilette, a last start third placegetter at Randwick,” was the rider's summation.

Another smart sprinter Eleanor has won good quality races on is Molasses, trained at Forbes by Dennis Bush for Danny Kotel from Grenfell. Feature race winners for Eleanor have also included the Gilgandra Cup on Devilgate Road trained by Craig Martin from Tamworth and the Collie Cup at Gilgandra on the Dean Mirfin-trained Art ‘N’ Ollie.

Eleanor recently became a part of racing history in NSW as one of the first to be granted a dual trainer-jockey licence, a career path also taken by Melbourne Cup-winning jockey Michelle Payne.

Nominations for the Bathurst meeting featuring the Ray White Emms Mooney Bathurst Showcase Cup (1800m) and $80,000 The Panorama (1300m) on Sunday 27 September close at 11am on Tuesday 22 September.