The brave comeback to race riding by Nysa Burrells continued on Saturday when she won on the Graeme Brooker, Coonabarabran-trained Plectrum at Gilgandra.

Fighting for her life after a horse fell on top of her during barrier jump-outs at Warwick Farm on 29th December 2017, Nyssa suffered severe head injuries and was taken to hospital in a critical condition. 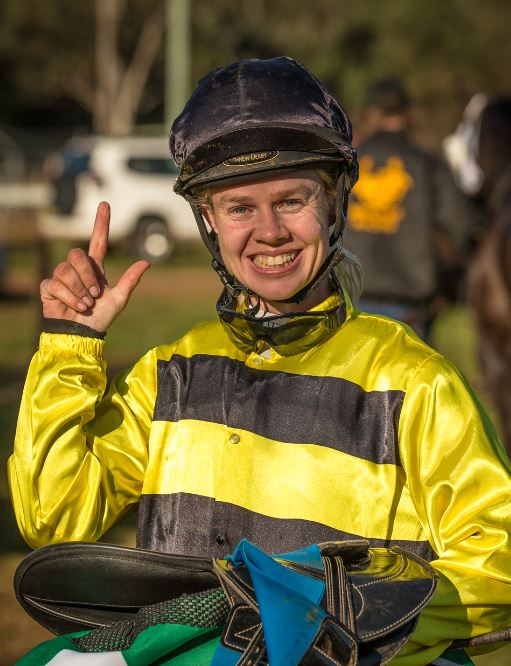 A beaming Nyssa Burrells after scoring on Plectrum on Saturday. Image by Janian McMillan (Racing Photography)

Following brain surgery, she remained in a coma until 9th January 2018 and exactly two months after the accident was released from hospital on February 26 to continue intensive rehabilitation.

Most doubted Nyssa Burrells would ever ride a horse again but with great determination, she resumed her apprenticeship and after a lengthy series of barrier trials made her comeback to race riding in June 2020 and in early August won on Zoey Lass at Gundagai.

Nyssa Burrells (33yo) has an overall tally of 75 winners and is now apprenticed to Warwick Farm trainer Greg Hickman.

The locals cheered Soldier Poy all the way down the straight as it became the career first winner for newly licensed trainer Kieren Hazleton.

A star on the rugby league field for the Gilgandra Panthers, the likable Kieren Hazleton is destined to also make his mark as a racehorse trainer having gained invaluable experience helping out for many years at the stables of his grandfather Bruce Parker, the very successful trainer who recently retired.

Motherhood obviously agrees with La La Loopsy, the winner of the feature race at Gilgandra, the 1280m Collie Hotel-Collie Cup.

The nine-year-old La La Loopsy, after suffering a tendon problem, was sent to stud in and in 2018 produced a foal by Bon Hoffa.

Previously trained by Leanne Aspros, Peter Nestor and Joe Curran, La La Loopsy had always displayed ability and at one stage was an early favourite for a Country Championships series.

A five-time winner, the lightly-raced La La Loopsy was snapped up for $1,750 by Bryan Dixon at an Inglis online auction last year and is proving a bargain buy.

*Dubbo will host a non-TAB meeting on Saturday followed by a TAB meeting at Mudgee on Sunday.