Only days after Andrew Gibbons rode his 400th winner for Kris Lees at Canterbury Park on Wednesday, his 18-year-old son Dylan will make his debut at Cessnock on Monday.

After 29 barrier trial rides, the youngster is “ready and raring to go” and partners Star Raider for Lees in the Benchmark 58 Handicap (900m). 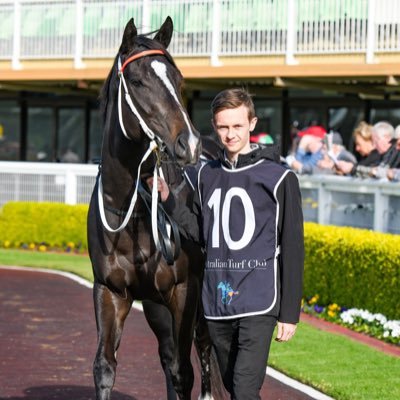 Gibbons won an 800m trial on the Beaumont Track last Monday (beating triple Group 1 winner Le Romain) on the Star Witness three-year-old, who is having his first start since last September and has an excellent country record so far of one win (at Moree on debut) and seconds at Muswellbrook and Tamworth from only three starts.

“Dylan has been with me full time now for about two years and is very enthusiastic,” Lees said.

“He has a good sensible head on his shoulders and, though he is tall, is light enough.

“We’ve taken our time with him, and he’s definitely ready to get going.”

Gibbons’s 4kg allowance will lessen Star Raider’s weight to 58kg, and the gelding has drawn barrier seven in a field of 10.

Having undergone a throat operation since he last raced, he will wear a tongue-tie for his resumption.

Andrew Gibbons has enjoyed another successful season, and his victory on Redoute’s Image for Lees at Canterbury Park on Wednesday edged him closer to clinching a NSW premiership for the first time.

After being runner-up (with 137 wins) to Greg Ryan in the State title last season, he has tallied 120 winners as the 2019-20 season draws to a close, and needs three winners in the last week to overhaul the suspended Blaike McDougall (122.5).

Gibbons doesn’t have a ride in Monday’s Benchmark 58 and admits he will be a little nervous watching his son make his debut.

“Being a jockey is all Dylan has wanted to do,” Gibbons said. “Even when he was three or four years of age and was given a present, he always found a way to turn into something to do with racing.

“I never encouraged Dylan to become a jockey, but naturally gave him my full support once I realised  he had made up his mind what he wanted to do.”

Ironically, Gibbons snr had never ridden a horse when he left school at the end of 1993 and had thoughts of playing soccer on a professional basis.

He rode his first winner Andy Handout on 17 December 1994 on the old Broadmeadow course proper at his “fifth or sixth ride”.

Dylan Gibbons completed Year 11 at St Mary’s Maitland in 2018 and, courtesy of a workplace arrangement, the school allowed him to have Wednesdays off in his final year so that he could go to the track in the morning and work at Lees’ stables in the afternoon.

“La Girl is a nice filly and is in good order, but has drawn awkwardly,” Lees said. “Wild Fortune is resuming and I might wait until Thursday to run her at Hawkesbury.”

Sorrentina (Aaron Bullock) is a definite starter in the Class 1 Handicap (1600m), and Lees feels she is getting close to a win.

“She was beaten little more than a length when sixth at Newcastle last time at her second start back, and should get a good run from an inside draw,” he said.