Rising 11yo Chasing A Hat-Trick At Murwillumbah

Kempsey galloper French Command may be a 'senior citizen' in racing terms, but the 10-year-old is performing as well as ever and chases the first winning hat-trick of his 150-start career at Murwillumbah on Thursday.

Trainer Hilary Dew is rapt that the gelding, just over a month away from officially turning 11, continues to be highly competitive and is enjoying his racing.

French Command has won four races so far in the 2019-20 season, including three of his past five starts. 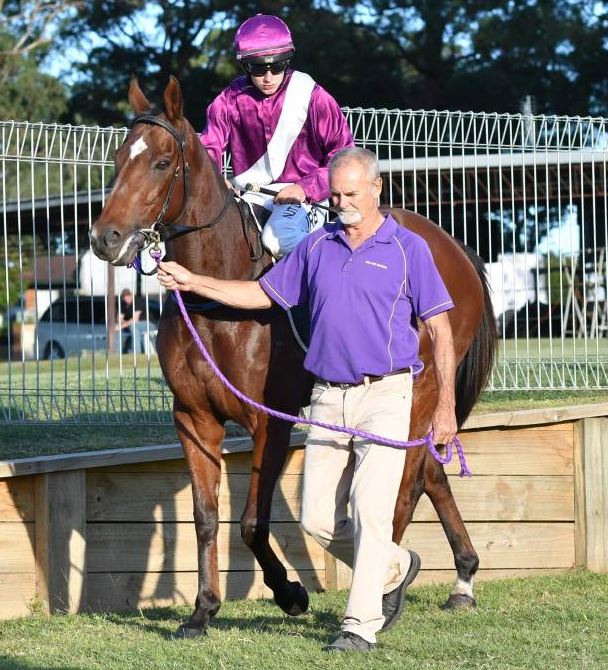 Dew expects another strong effort from him when he heads up the highway to Murwillumbah for Thursday's Swimart Tweed Benchmark 58 Hcp (1200m) where he has to carry the 62kg topweight.

"He does have to carry the 62kg, which is my main concern on Thursday, but the way he's racing at the moment I'm sure he'll still be very competitive again," said Dew.

"He's racing as well as ever and it would be great if he can win another race on Thursday and complete a hat-trick. He's always performed well at Murwillumbah in the past and he'll certainly try his heart out again, but if he gets beaten by a better one on the day, it won't worry me."

The closest French Command has previously come to completing a hat-trick was way back in 2014 when he scored back-to-back wins at Lismore and Murwillumbah but was narrowly beaten at Kempsey at his next start.

The horse who edged him out at Kempsey was Get On The Grange who turned out to be a very useful galloper, winning several metro races and being placed in the Grafton, Wyong, Ballina and Taree Cups. Dew was based on the Sunshine Coast back in 2012 when he first saw French Command racing at Gympie.

The Court Command gelding had made his debut in May that year when trained by Harry Reed, winning at his fourth start at Nanango on October 6, 2012.

"I'd seen him race at Gympie and liked the look of him. Harry didn't think he was much good and I was able to buy him for $5000," said Dew.

That $5000 outlay turned out to be a pretty good investment for Dew who races the gelding in partnership with his wife Patricia.

French Command has gone on to win another 16 races for the Dews. He has won on nine different tracks in Qld and NSW over distances from 1000m to 1600m. He has also collected 33 minor placings along the way and if he can notch his 18th career win on Thursday it would push his prizemoney earnings beyond the $250,000 mark.

"He's done pretty well for a country horse and he's like one of the family now. When he does finally retire, he'll have a nice home here with Pat and me for the rest of his life."

Thursday marks French Command's return to Murwillumbah for the first time since February 2014 when he was placed in a Benchmark 70. His overall record at Murwillumbah is one win and two placings from his only three starts at that track.

"I spent 30 years training on the Sunshine Coast, but I returned to my home town of Kempsey five years ago, so we haven't gone back to Murwillumbah since then as it's a five-hour float trip," said Dew. "But he's going back up there for this race on Thursday and then I'll probably give him a spell of about a month to six weeks and bring him back again next season.

"Hopefully he's got a few more wins in him, but if he doesn't he's certainly done enough for us already."

French Command will have a couple of stablemates for company on Thursday. Rocket Royale will run in the Coolabah Cooling Services Maiden Hcp (1010m), Karlu Dreaming in the Iron Jack Class 2 Hcp (1550m) and Wonderful Thing in the Riverview Hotel Benchmark 58 Hcp (1200m).

Dew thinks Rocket Royale and Karlu Dreaming can both be competitive in their respective races.

Murwillumbah trainer Matt Dunn can build on his best season to date with his runners at Thursday's six-race meeting. Dunn's best previous season was 2018-19 when he trained 106 winners and with starters at Doomben, Kensington, Hawkesbury and Murwillumbah over the next two days, he should be able to eclipse that mark this week.

The mare has won her only two previous starts over the Murwillumbah 1550m and is coming off a last-start second to the very promising Macchina Volante in a Benchmark 66 at Casino last week.