Newcastle trainer Jason Deamer is looking to continue his successful run for Dynamic Syndications over the next few days, starting off with in-form mare Constanzia at Coffs Harbour on Friday.

Constanzia heads Deamer's team heading to Coffs Harbour for the eight-race Racing NSW Country Showcase meeting and chases a winning hat-trick when she lines up in the Toormina Cup Benchmark 66 Handicap (1315m). 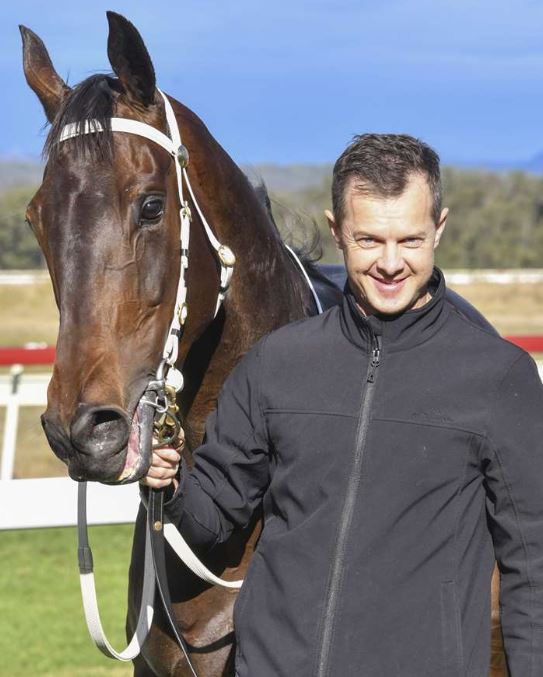 Jason Deamer with Constanzia after the horse scored at Cessnock. Image by Bradley Photographers

"Dynamic Syndications are great to train for. We've been having a bit of success lately and hopefully, it can continue over the next few days at Coffs and then with Chocolatier on Saturday," said Deamer.

Besides Constanzia and Chocolatier, Deamer's other recent winners for Dynamic Syndications include Savvy Crown, Discombe, Decroux and Lochita.

Constanzia, a four-year-old Pierro mare, is putting together an impressive record since she joined Deamer's stable last year after having had one run for Gai Waterhouse and Adrian Bott in August of 2018 and just one other start in May 2019, when transferred to the Ciaron Maher/David Eustace yard.

In her seven runs for Deamer, Constanzia has won four times and been placed twice.

She has won her two starts of this current campaign, resuming to win a Benchmark 58 over 1300m at Tuncurry on May 16 then last start scoring a very strong win after a torrid run in a Class 3 Hcp (1350m) at Cessnock on June 2.

"She was wide throughout at Cessnock and was entitled to weaken in the final stages but fought on very strongly at the end," said Deamer.

"I think she had a few little issues before I got her and was restricted to just those two well-spaced runs. She's settling a lot better these days and is appreciating being ridden quietly.

"Being a well-bred mare, hopefully, we can get a city-class win from her in the future. She hasn't been able to draw a decent alley in most of her races since I've had her and she's come up with another awkward gate on Friday (barrier 10), but on a heavy track that might not be so bad."

The Coffs Harbour track was rated a heavy 9 on Thursday morning and more rain is expected over the next 24 hours.

"The heavy track is the question mark over her chances," said Deamer. "She did run third on a heavy track first-up last year in her only previous run in those conditions and got through it okay that day, so I don't think it'll pose a problem."

Deamer has accepted with three other runners at Coffs Harbour on Friday - Fiindellee in the Maiden Hcp (1215m), Hilarious in the Maiden Plate (1415m) and The Deel Is Dun in the Benchmark 58 Hcp (1615m).

"Findellee hit the line well when he resumed (for third at Cessnock) earlier this month and the step up in distance on Friday will suit him, but he is unknown in the heavy," said Deamer. "The Deel Is Dun won well enough at Cessnock last time over 1570m but is also a query on the heavy track."