American Owner Will Tune In To Watch 'Bella' At Grafton

Mudlark Bella Boss will have her biggest fan tuning in from Los Angeles as usual when she runs at Grafton on Thursday.

Mrs Catalona had a share in Bella Boss when she was previously trained in Victoria by Henry Dwyer and contacted Pepper after she purchased the mare in 2018.

"After I bought her, Jan contacted me and asked if she could buy a share of her as she wanted to keep an interest in her and I was happy to do so," said Pepper. 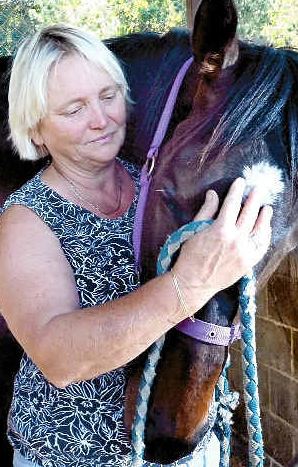 "We've never met face-to-face, but we speak on the phone or via Facebook a lot. Jan is just a lovely lady - the perfect owner.

"Whenever Bella Boss races, Jan stays up to whatever time it is in Los Angeles and watches her races via the Racing NSW website. And she calls me after every race for a chat.

"Jan's in her 70s and has been doing it a bit tough during the coronavirus lockdowns in the US as her husband has been working in New York, so hopefully our mare can notch another win on Thursday and boost her spirits."

"Hopefully, we don't get much more rain before Thursday and the meeting gets called off," said Pepper.

"She absolutely loves heavy ground so she's got a bit going for her on Thursday.

"All of her recent runs have been terrific and even on a good track at Casino at her last run she was probably unlucky not to win after sitting back on the stalls when they jumped and missing the start. And then she got squeezed out when going for a run in the straight."

The five-year-old mare failed to win in her first five starts when trained in Victoria, but has won five of her 17 starts for Pepper.

Bella Boss is coming off two recent unplaced runs on firm tracks at Grafton on May 4 and at Casino on May 29, but can bounce back in a big way on Thursday when she strikes another rain-affected track.

Bella Bossa's best form earlier in her career was over 1000m-1100m, but this preparation she has successfully stepped up to 1600m and Pepper thinks she can get further.

The mare's half-brother Elvison won a 3450m Steeplechase at Warrnambool earlier this month: "She can be a worry in the barriers, but always relaxes in her races and I think she could handle 1800m to 2000m, but there's not much around for her at the moment, so I've kept her on the fresh side."

Pepper accepted with two other runners at Thursday's meeting - Electric Miss in the Class 1 (1400m) and Bob'N'Cat in the Maiden Plate (1400m).

Electric Miss, a filly Pepper ended up with after entering a wrong bid online, is coming off a last-start Casino maiden win, but is unlikely to run on a heavy track on Thursday.

Pepper thought she had bid $1250 for the filly, but had mistakenly entered $11,250 which turned out to be the top bid. She came to an agreement and ended up paying $6000.

"She's a nice filly who has won around $11,000 in her two starts so far. I want to head to Grafton with her for the Guineas and don't really want to knock her about on a heavy track on Thursday, so she's probably won't run," said Pepper. "But my other runner Bob'N'Cat should run well in his race."

Bob'N'Cat wasn't suited first-up over 1000m at Casino on May 29 and will be better suited stepping up to the 1400m on Thursday.

Leading Murwillumbah trainer Matt Dunn could dominate half of Thursday's meeting with strong contenders in the first four races. He has Penshurt lining up in the Open Hcp (2100m), Maspoeta, Hogan's Dare and Ready To Party clashing in the Maiden Hcp (1200m), Thunderous Strike in the Class 1 Hcp (1400m) and Stuck With You tackling the Class 2 Hcp (1200m).

Former French galloper Penshurst won't get a better chance to finally land his first Australian win when he takes on just four rivals in Thursday's race.