Trainer Hopes Addition Of Blinkers Does The Trick At Port (Fri)

Former Canberra gelding Gironde has hardly put a foot wrong over the past few months since joining Nathan Doyle's Newcastle stables and the young trainer thinks the three-year-old can rebound from a last-start Sydney failure when he returns to Port Macquarie on Friday. 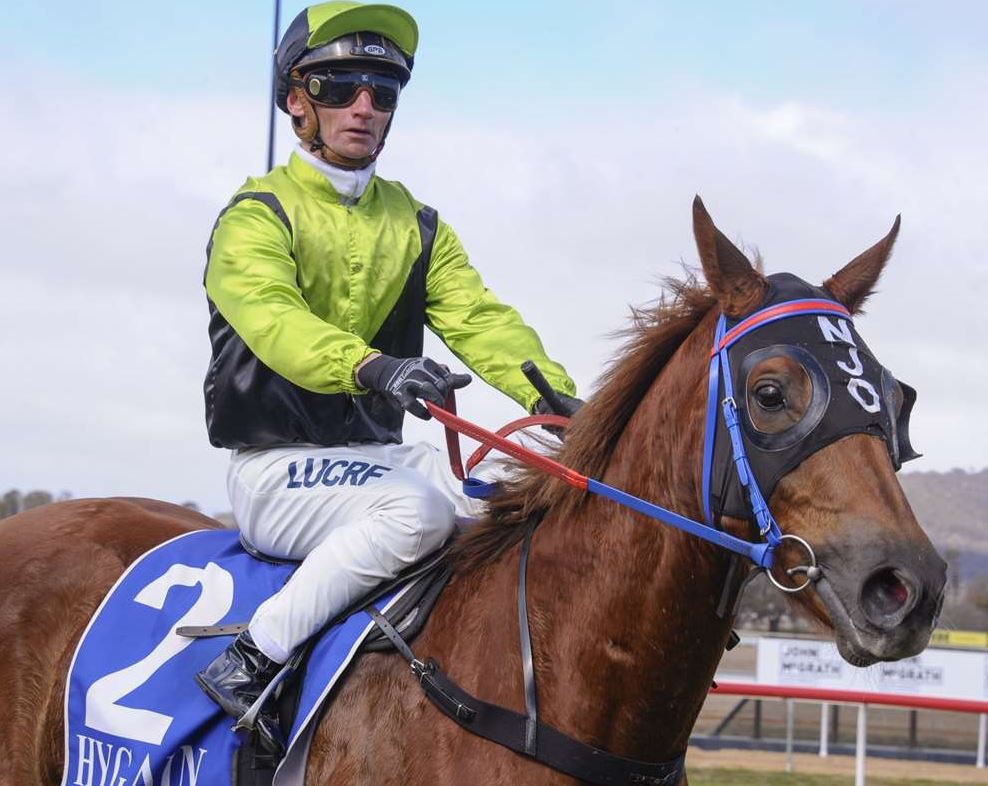 Gironde (Brendan Ward) after a Canberra win when previously prepared down south. Image by Bradley Photographers

Formerly with Canberra trainer Nick Olive, Gironde won his first three starts for Doyle this year and is unbeaten in two appearances at Port Macquarie.

Doyle then gave him a chance in Sydney at his most recent outing on March 25 when he tackled a 3YO Benchmark 70 over 1400m at Warwick Farm, but he had a torrid run out wide without cover for most of the race and failed to beat a runner home.

The trainer will add blinkers to the gelding on Friday and believes Gironde can keep his perfect Port Macquarie record intact when he lines up in the Carlton Dry Benchmark 66 Hcp (1200m).

"He did have a tough run out wide with no cover at Warwick Farm last time out, but was probably still a bit disappointing," said Doyle.

"He's a much better horse than he showed that day and the blinkers go on at Port Macquarie on Friday - that's the key. He's worked very well in the blinkers, he drops back in trip and tackles an easier race on Friday, so hopefully, he bounces back to winning form.

"And he's won twice at Port Macquarie so he obviously loves the track there. I'm not sure if he'll develop into city-class, but I think he could win races at the provincials."

Doyle has booked 1.5kg-claiming apprentice Grace Willoughby, successful at her one previous ride on Gironde at Port Macquarie two starts ago, to partner the gelding again on Friday.

Gironde has drawn ideally in gate four, but Doyle didn't have similar luck with barriers for some of his other Port Macquarie acceptors - Rainy Day, who drew gate 11 in the Maiden Hcp (1500m), Lucky One, who landed gate 14 in the Maiden Plate (1200m) and Parlour, who landed gate 12 in the Class 1 Hcp (1500m). Parlour has already been scratched and Doyle also plans to withdraw Lucky One.

"Rainy Day will run. She been going well and just hasn't been having any luck with barrier draws. I think she's a filly who, once she can break through, could string a couple of wins together."

Rainy Day, has been placed on heavy ground at her past two starts at Port Macquarie (March 20) and Tamworth (April 3). She ran her best race five starts back on a good track at Gosford when second in a Maiden over 1600m.

Doyle, 31, is having an excellent season and is an emerging talent in the NSW training ranks. From 94 starters so far this season he has won 18 races and has some promising young horses like Pride Of Adelaide and Cafe Royal in his stable.

The trainer posted a career highlight by winning the $153,000 Muswellbrook Gold Cup with the enigmatic $51 outsider Petrology back on March 27. Doyle was born and raised in Muswellbrook and specifically set the eight-year-old for his hometown feature.

"We've been having a pretty good season and I have great support and a great staff," said Doyle. "Pride Of Adelaide and Cafe Royal are very promising and I've also got a talented mare Strawb (by Fastnet Rock and winner of her past two starts) who I have a good opinion of, so we've got some nice horses coming through for the future."

Meanwhile, Wyong trainer Damien Lane's decision to bypass Wednesday's Kensington TRack meeting with Girls Kick On could pay off when the filly lines up in Friday's McGuigan BMW 2YO Hcp (1000m) at Port Macquarie.

Girls Kick On was scratched from Wednesday's city assignment after drawing wide, but has drawn ideally in gate three in the Port Macquarie race.

Girls Kick On, a filly by Scissor Kick, lines up for her third race start on Friday after debuting with a third over 900m at Newcastle on March 19 then following up with a bold run at big odds when second behind the talented Kris Lees-trained Zeftabrook in the $200K Wellington Boot (1100m) on April 5.

The filly, a $21 chance in the Wellington Boot, gave a huge sight out in front, but was just collared late by the odds-on favourite Zeftabrook.

Lane also has in-form eight-year-old Oakfield Jet lining up against Gironde in Friday's Benchmark 66. Oakfield Jet had won one race - back in October 2018 - before entering Lane's stable at the start of this year but has now won two of four starts for his new trainer.