Coffs Harbour trainer Warren Gavenlock expects his promising gallopers Plonka and Alternative Facts to underline their Country Championships credentials when they line up for different assignments at Grafton on Thursday.

Plonka, a slashing first-up second in an Open Handicap over 1000m at Grafton on January 27, tackles Thursday's Red Packet Open Hcp (1215m) while Alternative Facts runs in the Year Of The Rat Benchmark 58 Hcp (1420m). 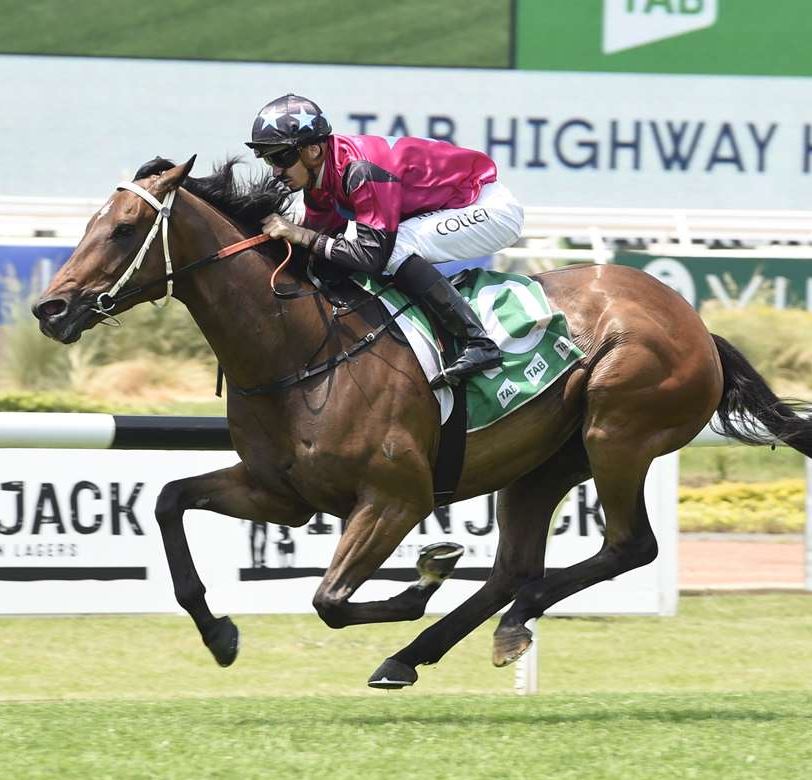 Plonka (Jason Collett) is airborne as he cruises home at Rosehill Gardens. Image by Bradley Photographers

Gavenlock is in the enviable position of possibly having both gallopers head towards the $150,000 NRRA Country Championships Qualifier over 1400m on his home track at Coffs Harbour on February 15.

First and second in the NRRA Qualifier gain a berth in the $500,000 Newhaven Park Country Championships Final (1400m) at Randwick on April 4.

The trainer wasn't so sure he would ever be in this position with Plonka and Alternative Facts, who have both had to overcome adversity in their relatively short racing careers.

Plonka almost died twice earlier on before he had even raced while Alternative Facts battled back last year after being sidelined with pneumonia.

"Earlier on when he was at the breakers at Randwick, they didn't know what to do with Plonka. They thought he may have been a 'wobbler' and he was quite ill for a while," said Gavenlock.

"He then came to me and we got him right, but then he got the 'scours' - so we almost lost him twice. He also had arched feet, so it was hurting him every time he galloped."

All those problems are well behind Plonka now and the four-year-old son of Epaulette has won three races and been runner-up another three times from just eight starts. He gave Gavenlock his first city winner when he scored at Rosehill last November before going for a spell.

He showed he was on target for a Country Championships campaign when he resumed at Grafton on January 27, hitting the line late for second behind All Stand over 1000m. He is unbeaten in two previous second-up runs and looks primed for another big effort in Thursday's race.

"He was an odds-on favourite when he resumed at Grafton, but I wasn't disappointed with his run at all," said Gavenlock. "It was his first run in Open company and he is only a Class 3 horse. I thought his run was sensational.

"I'm expecting another terrific effort from him at Grafton on Thursday, then it's on to the Country Championship Qualifier on his home track at Coffs."

Gavenlock is also delighted with how five-year-old Star Witness mare Alternative Facts has come back to racing after being sidelined for a lengthy period last year with pneumonia.

Winner of three of her 11 starts, Alternative Facts began her career with Kris Lees, then won her first two starts for Gavenlock in December 2018. But she was sidelined for much of 2019 and finally returned to racing on December 5 with a slashing win at Coffs Harbour over 1000m.

She hasn't had the best of luck in her three subsequent starts, the latest when she came off an outside gate to finish second to Salad Dodger in a Benchmark 66 over 1100m at Port Macquarie on January 24.

"It's great to have her back racing so well as you never quite know how they are going to come back after battling pneumonia," said Gavenlock.

"She was down to run at Newcastle over 1400m last Saturday, but with that meeting called off because of the heat, I've had to throw her in the deep end a bit by running instead in Thursday's race with a big weight (61.5kg)," said Gavenlock.

"I still wouldn't be surprised if she was able to win, but I'd be happy just to see her run well, then head to the Country Championships Qualifier along with Plonka. It's an exciting time to have both horses heading in that path and it's hard for me to split them.

"Alternative Facts grinds more into her races while Plonka can accelerate off a dime. Plonka's potential is untapped.

"He gave me my first city winner last November and I'd love to be back there in April at Randwick with a serious chance in the Country Championships Final. That's what dreams are made of, it's what gets you up in the morning.

"But the Country Championships Qualifier at Coffs is going to be a tough race to win. There are a lot of smart horses around the Northern Rivers at the moment and I think our Qualifier will be toughest of the lot."