Canberra trainer Luke Pepper is banking on a 'softer draw' to help his in-form mare Gold Touch ($8 on TAB fixed odds) bounce back to the winner's stall if she gets the chance to run in Thursday's Summer Sprint (1200m) at Wagga.

Poor air quality continues to be a concern around NSW racing centres and Racing NSW stewards are monitoring the conditions at Wagga. They will make a decision at 7.30am on Thursday whether the meeting proceeds. 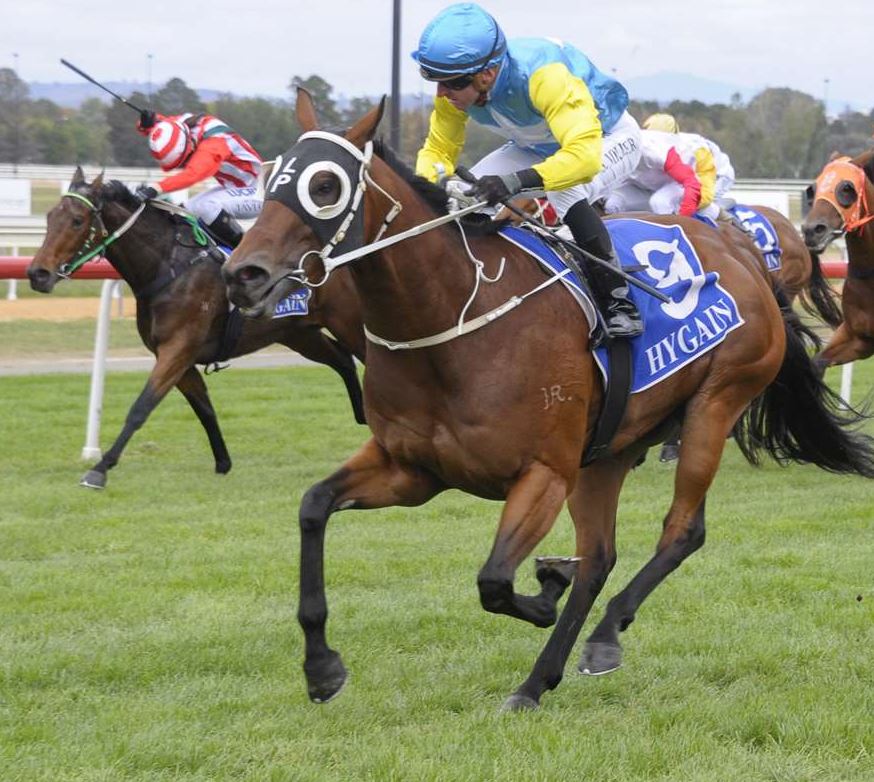 Gold Touch Scores at Canberra under the guidance of Simon Miller. Image by Bradley Photographers

Pepper was set to saddle up a couple of winning chances on his home track at Wednesday's Canberra meeting in the shape of Rosebank and Affinity Beyond, but with that meeting postponed due to poor air quality that pair will join Gold Touch and head Wagga if the 10-race meeting does go ahead.

"We've lost a few meetings now due to poor air quality, but trainers are all in the same boat and we can't complain because there are many more people far more seriously affected by the bushfires than us," said Pepper.

Pepper will be hoping Wagga proceeds as he thinks his team will run well in their respective races.

Mossman mare Gold Touch has been in great form, winning five of her past 11 starts.

She has been in particularly good form since she resumed from a break, winning first-up in a Class 3 over 1180m at Gunnedah on November 15, then winning again at Canberra in a Benchmark 65 over 1000m on November 29.

At her next run, she ran an eye-catching third behind Snippet Of Gold and Takookacod in a Benchmark 74 over 1200m at Wagga on December 24 when she powered home late from near the tail of the field.

Pepper doesn't expect her to be giving them such a big start in Thursday's race from barrier four: "She had to get back further than we would have wanted at Wagga last time because of her awkward gate," said Pepper.

"She settled just behind the eventual winner (Snippet Of Gold) but he just sprinted a bit quicker than she did in the straight.

"He (Snippet Of Gold) looks a nice horse who should be very hard to beat again on Thursday, but from a softer draw, my mare should settle a lot closer and with no weight on her back (54kg) should run another great race.

"She is probably looking for a bit further now, but I've kept her on the fresh side for this race."

Snippet Of Gold has drawn ideally in gate five as he attempts to notch back-to-back Wagga wins, although his second-up record is not great.

Noble Descent, who won four of his eight starts last preparation, is resuming since April 14 last year. He won first-up last campaign over 1300m at Wagga.

Common Purpose (barrier 17), Critical Reaction (barrier 14) and Yousaybolt (barrier 15) all drew awkward gates but can figure in the finish with any luck.

Common Purpose tackles Thursday's race atter two unplaced runs at Rosehill and Randwick this time in, Critical Reaction has won three of her past four starts for Jerilderie trainer Phil Sweeney, and the Ron Stubbs-trained Yousaybolt is a lightly-raced mare who has always shown some promise and resumes since April. She had a quiet trial at Wagga on December 24 as she gears up for her return.

Luke Pepper expects his other key runners Rosebank and Affinity Beyond can run well at Wagga, although we would have preferred they run at Canberra on Wednesday.

Affinity Beyond tackles the Class 2 Hcp over 1000m on Thursday, while Rosebank lines up in the (F&M Maiden Plate over 1200m.

Affinity Beyond, a three-year-old filly by Starspangledbanner, is coming off a brilliant first-up win at Canberra on December 15 when she outclassed a Maiden field over 1000m by almost six lengths.

"She has drawn wide at Wagga (barrier 15) but she's a fast filly with a lot of ability. She put it all together first-up at Canberra and if she repeats that on Thursday she'll be hard to beat again," said the trainer.

"Rosebank has been knocking on the door since we got her from Victoria and her run the other day (at Canberra on December 15) was very good. She should race well in THursday's race."

Rosebank has been placed in her only two runs for Pepper after previously being trained by Pat Cannon in Victoria.