Irish Lass Puts Her Name In Lights After Winning Treble

Her Irish brogue, engaging smile and chatter were winning introductions to her new regional racing fraternity, and if Ellen Hennessy hit a hurdle early career, she rebounded spectacularly at the Sapphire Coast TAB meeting on Monday.

Diminutive Ellen, indentured to Mick Smith at Queanbeyan, didn’t just break through for her first TAB winner, she rode the house down with a treble, amazingly as a four-kilo claiming apprentice.

Unheard of reckons Mick and plenty of others. 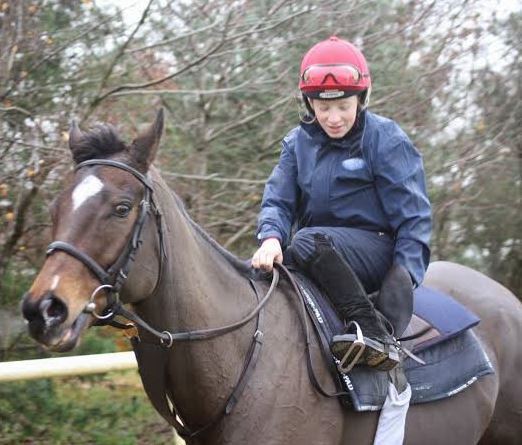 Ellen Hennessy when riding in Ireland

From a riding academy in County Kildare where compatriot and champion apprentice Robbie Dolan honed his skills, little known Ellen’s day of excellence started on Joe Cleary favourites Hard Core and Kiss My Swiss and wound up in the last on Lynda Bundy’s outsider Theatre Tickets.

“I rode just one winner back home, this is still sinking in - I’ve had so much support. Racing people here have been absolutely brilliant to me since I came back to riding,” Ellen enthused after she reduced her claim to three kilos.

“I rode just one winner back home, nothing remotely a day like this. Oh my goodness I didn’t expect TV interviews, I was nervous, I don’t think I’m too good at those, eh?" Ellen chuckled.

“I made a big mistake I regret when I first came out and was suspended for nine months when I was based at Braidwood. Then I worked as a waitress and in a pub and that was hard. I was determined to get back to doing what I love with horses.

"I ride at 51kg and when I was out it was difficult keeping weight down, but I managed. I’ve been riding since I was five years of age, ponies and then equestrian and show jumping.

“But I couldn’t have got back to race riding without so much support and opportunities in Queanbeyan and from Canberra trainers. I go back and forth through the week to ride work both track, I live close between them.”

Originally from racing heartland through the County Kildare Racing Academy, Corduff Stud and then with the renowned Prendergast stable, Ellen set her sights and ambitions afar as she followed the path of Irish apprentices Robbie Dolan and Tom Sherry to NSW.

And, of course, on another level in Melbourne, Ireland’s champion Group-winning hurdle and flat racing rider Johnny Allen.

After just a few months back, based in Queanbeyan, Ellen has been riding mostly at non-TAB meetings. On Monday she impressed with a blend of hands and heels balance and strength and little whip application.

Ellen rated on pace with Kiss My Swiss and Hard Core, and topped off a marvellous day from rearward on Theatre Tickets.

“Kiss My Swiss is a brilliant little thing, I didn’t see another horse after a few paces, she’ll win better races. You know I’m trying to show enough strength at my weight with hands and heels without resorting to the whip.

"Unless it’s absolutely necessary in a tight finish.  Some horses just go backwards when they get hit, they respond better to feel.”

As Ellen graduated from the traditional academy and worked at studs and profile racing stables amidst the lush green acreage, it could have been a shock to the system when she eventually arrived alone to tiny Braidwood and then eventually to drought-stricken and windswept Queanbeyan.

“Not really that tough, the Aussies are so friendly and make you feel at home, especially the racing people; so down to earth.”

Ellen quaintly describes her new friends and life experiences as “craic”. It’s the Gaelic word for ‘fun, entertainment and good company.’ It was all of that and more on Monday as the Irish brogue and the charming smile was on overtime.