Renowned Port Macquarie-based horsewoman Margaret De Gonneville thinks she may have missed out on the perfect race for Golden Comet a few weeks ago and is 'more hopeful than confident' about the consistent five-year-old's chances at Grafton on Sunday.

Golden Comet maintained his excellent first-up record when he resumed to win at Grafton on October 29, claiming the Jacaranda Prelude over 1100m.

The gelding returns to Grafton on Sunday to tackle the Raging Red Timbers Open Handicap (1200m) for his second run back, after missing out on a run at Port Macquarie on November 14 when the meeting was abandoned due to the bushfires. 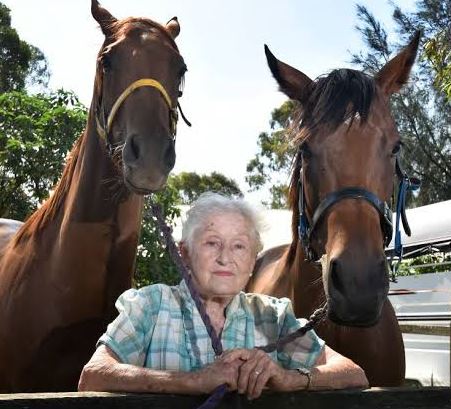 Trainer Margaret De Gonneville with a couple of her horses. Image by Ivan Sajko

"That Port Macquarie race looked the perfect race for him - perfect track, distance and barrier - but unfortunately we lost the meeting because of the bushfires," said the trainer.

"He's had a bit of break now between runs, but I think he's ready to rumble and I expect him to run well again at Grafton - he's a horse who always tries his hardest - but I'm more hopeful of winning on Sunday than overly confident. But it would be nice to get another win up just before Christmas."

Golden Comet has the excellent record of six wins and four minor placings from his 17 starts. Only one of those six wins has been over 1200m, but his trainer has no concern about him getting the trip.

"Now that he's settling better in his races, I think he'll get over even further," she said.

Golden Comet has been particularly effective first-up, with three wins and a third from his four fresh runs. His second-up record, however, is not as strong with just one placing from three runs.

"His second-up record is definitely not strong, but the difference this time up is that he had a trial before he resumed at Grafton," she said.

"I haven't trialled him in the past before he's resumed, so this time he's really going into Sunday's race 'third up'.

"He's a 'good doer', but he's definitely much trimmer for this (second-up) assignment at Grafton than he has been in the past."

Golden Comet drew gate six in Sunday's sprint and carries 58.5kg for his regular rider Jeff Kehoe. De Gonneville had no thoughts of seeking out a claiming apprentice for Sunday's race.

"No way. He can be a bit of handful this horse and he's definitely not a horse for an inexperienced apprentice," she said.

The John Sprague-trained Patriot is resuming since August but has won two of his previous four first-up runs. He raced well at Grafton during the July carnival, just going down narrowly in the $50,000 Sir James Kirby Hcp (1000m).

In-form Grafton galloper Melted Moments looks all set to complete a winning hat-trick when he lines up in Sunday's Benchmark 66 Hcp (1400m).

Melted Moments is coming off strong performances in Benchmark 66 Handicaps at Grafton (October 29) and Ballina (November 15) and is the one they will have to beat again on Sunday after trainer David Campbell booked 4kg-claiming apprentice Jayden Barrie.