Making Hay While The Sun Shines Next Saturday 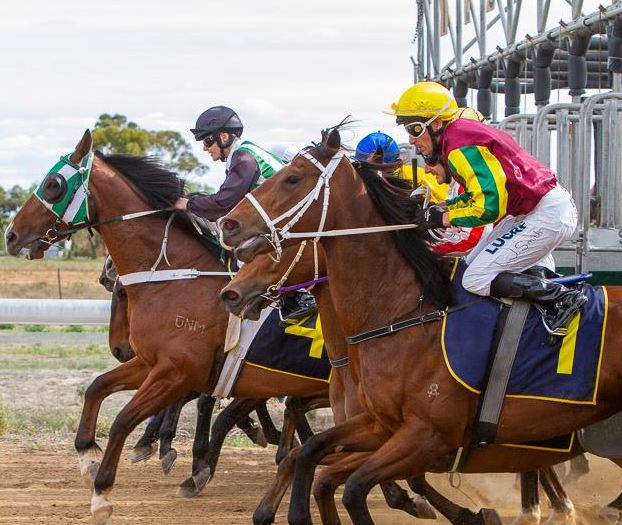 They're off and racing this Saturday at the annual Hay races. Image by Margie McClellend

“For the first time, patrons can book their drink tickets, marquees and even catering online.

“Everyone loves the convenience of online booking; you can do it any time of the day or night and it is fast and easy.”

Hay races next Saturday is a highlight of the social calendar for the South Western town attracting around 2000 people each year – nearly doubling Hay’s population.

“The resurgence was a credit to our Committee and their ongoing efforts to ensure crowds keep rising.

“We have all the information on the website that people need to have a great day out and we will continue to update the site with info, right up until raceday.”

This year patrons will also enjoy the improved main bar as well as a new bar with the addition of the HJC Champagne Bar.

“We are lucky to have the services of the Barley Grass Bar who will provide a champagne-only bar which will be a great addition to the day.”

The day will be even more important as the drought bites hard.

“Not only does the day provide a much-needed economic boost for the town, but it is really important for everyone to have a chance to get together and forget about the dry for a while,” added Mr Clark.

Hay races are renowned for the traditional country race meeting feel with the track lined with marquees and one of the most lucrative Fashions on the Field events in country NSW.

The Tapper Agri Services Hay Cup is the highlight of the six-race program with the $17,000 prizemoney attracting good quality fields from across NSW and Victoria.

On the same day, Inverell Jockey Club will stage its Inverell Battlers Cup.

“Most of the qualifiers for the Battlers Cup have been done and dusted, with the emphasis on ‘dusted’ as the North West has been experiencing the toughest drought in living memory,” said IJC’s Mike Witherdin.

Run as the $22,000 feature on Inverell’s Saturday Sky 2 meeting, the Batters Cup is run over 1400m and restricted to horses that have competed in one of the lead-in races across the North of the state during the year.

The qualifiers, from Narrabri to Tabulam, may have been run on some drought-affected tracks but Inverell has its track in great condition coming out of the winter and benefiting from the on-course bore to allow continued irrigation.

The meeting also features the open handicap Diggers Cup over 1800m with the Club last year reintroducing the old nine-furlong (1800m) start for the first time in many years, as well as a Class 2 Picnic Race Club Cup over 1200m.

The picnic club sponsors the race and has a party marquee during and after the day’s racing.

Cowra Jockey Club will also be hosting a five-race meeting on Saturday, a non-TAB meeting that is well-supported by the locals and strong fields expected.

“All on-course amenities will be provided, and some local businesses have got behind this meeting with some sponsorship dollars such as Raine & Horne Cowra and Cowra Bowling Club,” said CJC’s Peter Ford.

“Some of the locals are using this meeting for a catch-up with friends and enjoy the races before the mad Christmas season starts.

“Cowra will then start preparing for the town’s Cowra Cup meeting held on Sunday January 19. Tickets for the highly successful Calcutta will go on sale that month.”