For Coonamble’s prodigal racing son, Damien Lane, his home town Cup remains an elusive career mission, and for Mudgee’s Cheryl Crockett, the cheer squad will be just as extensive and the memories precious. 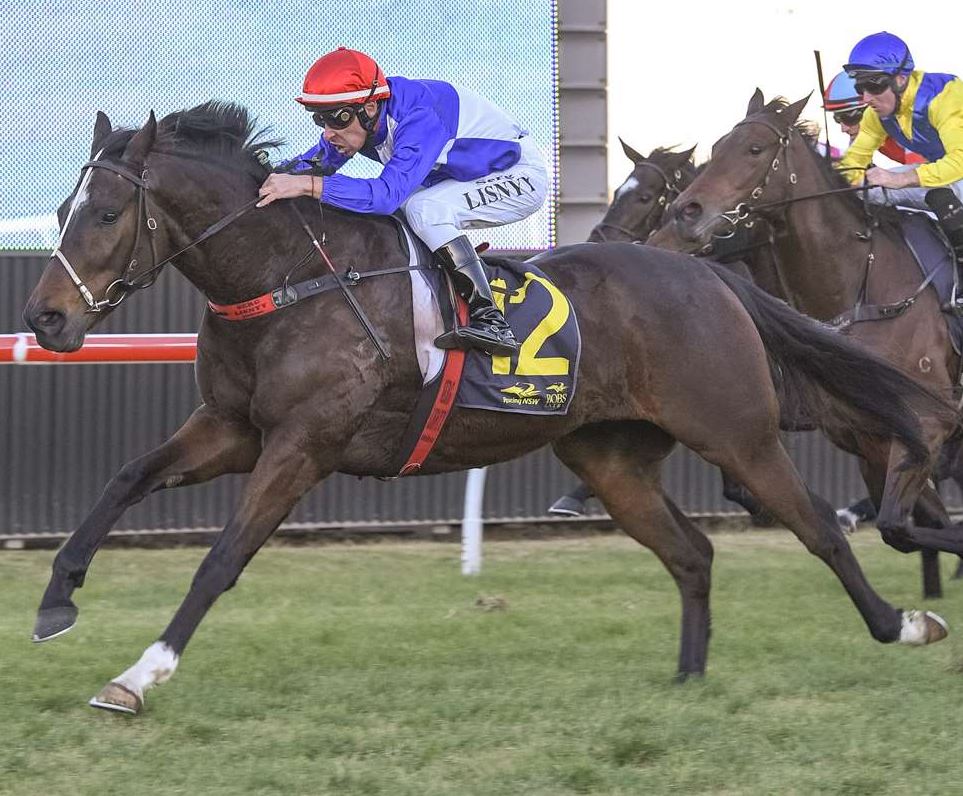 All But Gone (Serg Lisnyy) in winning form at Kembla Grange. Image by Bradley Photographers

With the task to thwart the imposing presence of Gai Waterhouse and Adrian Bott with TAB Cup favourite and city grader Falcon Island ($2.25 favourite on TAB fixed odds).

The profile supporting race is the TAB $35,000 Keady Family Crystal Sprint that has again attracted a crack field of regional sprinters.

Lane epitomises country racing values. He returns home each season with runners for the grand raceday.

Again he targets the Cup with seven-race winning veteran All But Gone ($23), a city winner and placegetter who ran a neck second in last year’s Cup behind Red Knot.

Damien, who has won the Coonamble Crystal Sprint, Cannonball but not the Cup, grew up as a schoolboy stable hand for the famed Lundholm’s and lived in the same Coonamble street.

Now training a healthy team at Wyong, Damien has All But Gone, primed and freshened after a strong win at Kembla in July.

Cheryl Crockett a Coonamble regular over the years with her late husband Max, will have just many supporters.

“Over the years, it’s the only Cup in our area Max hasn’t won, so it'll be lovely if we could do it, but it’s so hard now with the bigger stables coming for all that prizemoney,” Cheryl offered.

“Gai [Waterhouse] has a city grade runner, but it’s hard to win anywhere nowadays. The prizemoney is so good in the country feature races now.

“This gelding is a real gentleman, a pleasure to train. Just so genuine and tough.

“His form with Les shows he puts in every time. So honest.

“He carried 61kg when he won at Forbes, he’s run second in open company to some good horses since, and he’s been up in the weights running good races in town.

“I’ve only got this gelding and two more in work now. That’s all I can manage.”

"Cameron [son] is doing really well up in Scone and some nice horses - he trained a double at Muswellbrook the other day.  I’ve got a lovely little girl, Amy Spry helping me and riding work now.”

Over decades at Randwick Max pre-trained for Bridge, Bart Cummings, Tommy Smith and Neville Begg before he moved to train at Mudgee for regional premierships.

Before Bravissimo, Bridge regularly sent city grade gallopers to Max once they had reached their limits.

In June, Bravissimo was transferred to Cheryl, winning first-up at Forbes off a trial and then runner-up in open company at Bathurst and Mudgee behind talented Press Box and Sugar Dance respectively.

Sugar Dance has been scratched from the Cup to run with topweight in the Crystal Sprint where he is a $5.50 chance.

At present Coonamble is rated a good 3 racing surface in fine weather.