Veteran Gold Coast trainer Harold Norman is recovering from a recent knee replacement, but his in-form galloper Shauquin ($6 on TAB fixed odds) might just put a spring back in his step if he can land Friday's $40,000 Riverview Hotel Murwillumbah Cup (1530m).

At 82, Norman is the oldest 'A Class' trainer in Queensland and is back on his feet after the recent operation. He expects to be trackside at the Murwillumbah Cup meeting and thinks his ex-Melbourne galloper Shauquin will run a big race. 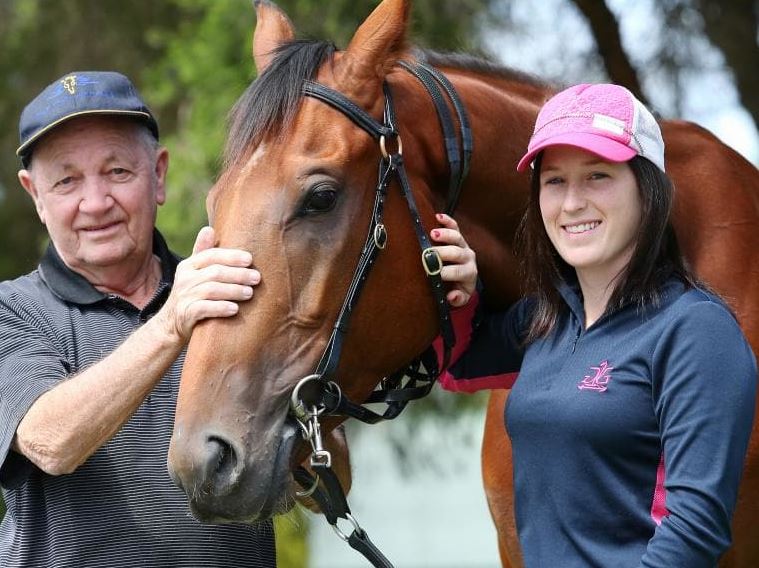 “I’m not feeling too bad now and am getting around with the horses again, so I expect to be there at Murwillumbah on Friday,” said Norman.

“He’s drawn awkwardly (barrier 13), but he’ll go forward as he usually does and the Murwillumbah track should suit him. He’s been racing very well since he came up here from Melbourne and I think he’ll run another big race on Friday.”

Formerly trained in Melbourne by Danny O’Brien, Shauquin won three of his first 16 starts in the south before he was purchased by owner Peter Wigham last year and transferred to Norman.

A six-year-old son of Savabeel, Shauquin has been very consistent this preparation, winning three of his past seven starts.

He broke through for his first win for Norman at Ipswich in April, won again at the Gold Coast on June 8, and last start on August 3 led throughout to beat Aquavite in a Class 6 Handicap (1600m) at Doomben.

Shauquin carries a set of familiar colours that mean a lot to Norman and he would love to see them carried to victory again in Friday’s Cup.

Norman has had a host of winners over the years that carried the lime green and orange striped jacket and blue cap silks of his former long-time friend and owner, the late Dr Jack Woolridge and his wife Sue. Dr Woolridge passed away in March 2018.

Two of the Woolridges' best horses with Norman were Count Scenario and Kugelhopf.  Count Scenario was a terrific galloper, winning 12 races, including the 1999 Grafton Cup.

He was also placed in several Listed and Group races, including a second to NZ stayer Cronus in the 1999 Group Two Prime Minister's Cup (2400m) at the Gold Coast, a second to Ancient City in the 1999 Listed Eagle Farm Stakes (2200m), third in the 1999 Listed Wagga Cup (2000m) and another third (as the 100/1 rank outsider) in the 1998 Group Two Queensland Guineas (1600m) when he was just collared late by Insecure and Enforced.

Kugelhopf started his career with Norman's great mate, the late trainer Bede Murray, before later coming to the Gold Coast in 2002. Norman trained him to win the 2003 Listed Toowoomba Cup (2050m) and the 2003 Group Three Queensland Cup (3200m) at Eagle Farm.

“When Jack died, Sue said she wouldn’t be racing horses anymore and gave the colours to me. I’ve now passed them on to Peter (Wigham) and it’s great to see them winning again with this horse (Shauquin),” said Norman.

“I remember another one of Jack’s horses, Give Us A Go, ran second in the Murwillumbah Cup a few years back, so it would be nice if his colours could go one better in the race with Shauquin on Friday.”

Give Us A Go ran second to Sir Stensible in the 1997 Murwillumbah Cup when it was run over 2000m in June.

Norman will also be rapt if Shauquin can land the Murwillumbah Cup for jockey Rikki Palmer, who only returned to race riding in June after taking time off to have her second child.

Rikki, married to fellow jockey Matt Palmer, did her apprenticeship with Norman and has a close association with the trainer. She partnered Shauquin for the first time when he scored at Doomben on August 3.

“Rikki’s a good rider who has always been a hard worker,” said Norman. “She’s only just come back after having her second child and I’d love to see her win Friday’s race on this horse.”

The other major chances in the Murwillumbah Cup include last-start Casino Cup winner Powerline ($4.40 favourite) from the Kris Lees stable, Ready For Danger ($4.60) and Zamex ($10, dead-heat winner of last year’s Cup), trained locally by Matt Dunn, and Ballina galloper Nothingforthepress ($5.50) if he lines up on Friday in preference to a Gold Coast start on Saturday.

Gold Coast nine-year-old Bodega Negra ($12), the Cup topweight with 62kg, is having his third crack at winning the Murwillumbah Cup after finishing seventh to dead-heaters Zamex and Future Event last year and sixth to Anne Bonny in 2017.

The Bruce Hill-trained Bodega Negra has been racing in terrific form though, notching wins in the South Grafton Cup (1615m) on a heavy track on July 7 and in the Sawtell Cup (1515m) with 61kg at Coffs Harbour on July 21.

Friday’s other feature on the eight-race program is the $30,000 Cudgen Leagues Club Newmarket Hcp (1200m) where Bodega Negra’s stablemate Taillevent ($4.20) is chasing back-to-back wins in the race.

Taillevent won the race comfortably last year and is coming off recent strong placings at Coffs Harbour (twice) and a last-start third at Doomben behind Publishing Power and Desert Digby.

The Matt Dunn-trained Snitz ($2.40 fav) looks hard to beat first-up. He has a good fresh record and geared up for his return by winning a Gold Coast barrier trial on August 12, beating Tom Melbourne and Exceedingly.