'Miracle' Mal Johnston Back In The Winner's Stall

Hall of Famer Malcolm 'Miracle' Johnston left Cessnock Racecourse in a much happier frame of mind than when he rode there more than three decades back.

Hawkesbury-based Johnston, who rode more than 2000 winners (including 49 Group 1s) in an outstanding career which took him to 11 countries before hanging up his saddle in 1995 and turning to training a couple of years later, won the 2YO Maiden Handicap (900m) with first starter Billy Piu Style (Chad Lever).

“I remember the late VP (Paul) Sutherland taking a couple of horses to Cessnock in the 1980s, and he asked me to go and ride them,” Johnston recalled.

“They started favorites and got beat. I had finished my apprenticeship and I’m pretty sure it was the only time I rode there.” 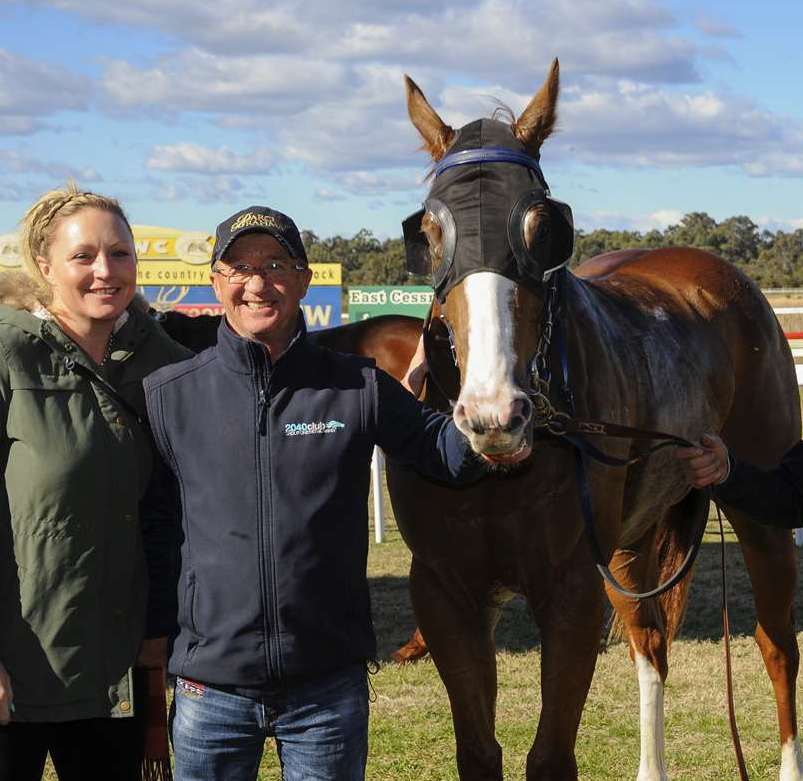 'Miracle' Mal Johnston with one of the connections of Billy Piu Style after his Cessnock win. Image by Bradley Photographers

Johnston had endured a frustrating run of minor placings between Quite Frankly’s success at Orange on April 19, 2016 and Golden Creek’s win at Wyong on June 6 this year.

He made sure there wasn’t another three-year hiatus this time, taking Billy Piu Style to Cessnock for his debut and putting blinkers on him.

“I was going to trial him at Rosehill last Friday week, but they were washed out,” Johnston explained. “He worked well in blinkers at home last week, and his previous couple of trials for me were good.

“I expected him to run well, but was concerned what might happen if he dwelt from an awkward alley. As it turned out, there was no need to worry. I told Chad to let him run if he jumped well.”

Billy Piu Style, a gelded son of American-bred Wicked Style and Gilded Time mare Discord, started at $9.50 and never really looked like losing once he took up the running.

He was strong to the line to hold out Fanciful Dream ($4.80), who chased him throughout. The $2.45 favourite Frozen In Time, also having her first start, was a distant third.

Both Golden Creek and Billy Piu Style are two of five horses transferred to Johnston when fellow Hawkesbury trainer Tommy Wong incurred a 10-months’ disqualification last December after Story Of Tong Sai had returned a swab irregularity after winning at Hawkesbury three months earlier. His term will conclude at the end of October.

“I hope Tommy doesn’t sell him because Billy Piu Style is a nice horse,” Johnston said. “He’s very quick and tough and I feel he can at least make provincial grade.”

Johnston has eight horses in work at Hawkesbury, and says it is “getting harder and harder”. “You’ve got to keep turning them over if they can’t measure up at the provincials.”

Johnston, 63 this year, rode the champion Kingston Town in 25 of his 30 wins, including the 1980 Cox Plate at Moonee Valley.

View the full results with race replays for Cessnock here