Mackay’s Golden Triangle Dominance To Be Relived At Talmoi

And when discussions arise about exactly who the best hoop was to ever ride the Golden Triangle, pundits readily agree Mackay was indeed a length or two ahead of the pack.

Mackay, now 79 and retired at Inverell, has accepted an invitation from Talmoi Picnic Race Club to attend round three of bush racing’s Golden Triangle at Garah on Saturday (June 22) and says he is looking forward to getting back to the races for a day out – especially Talmoi. 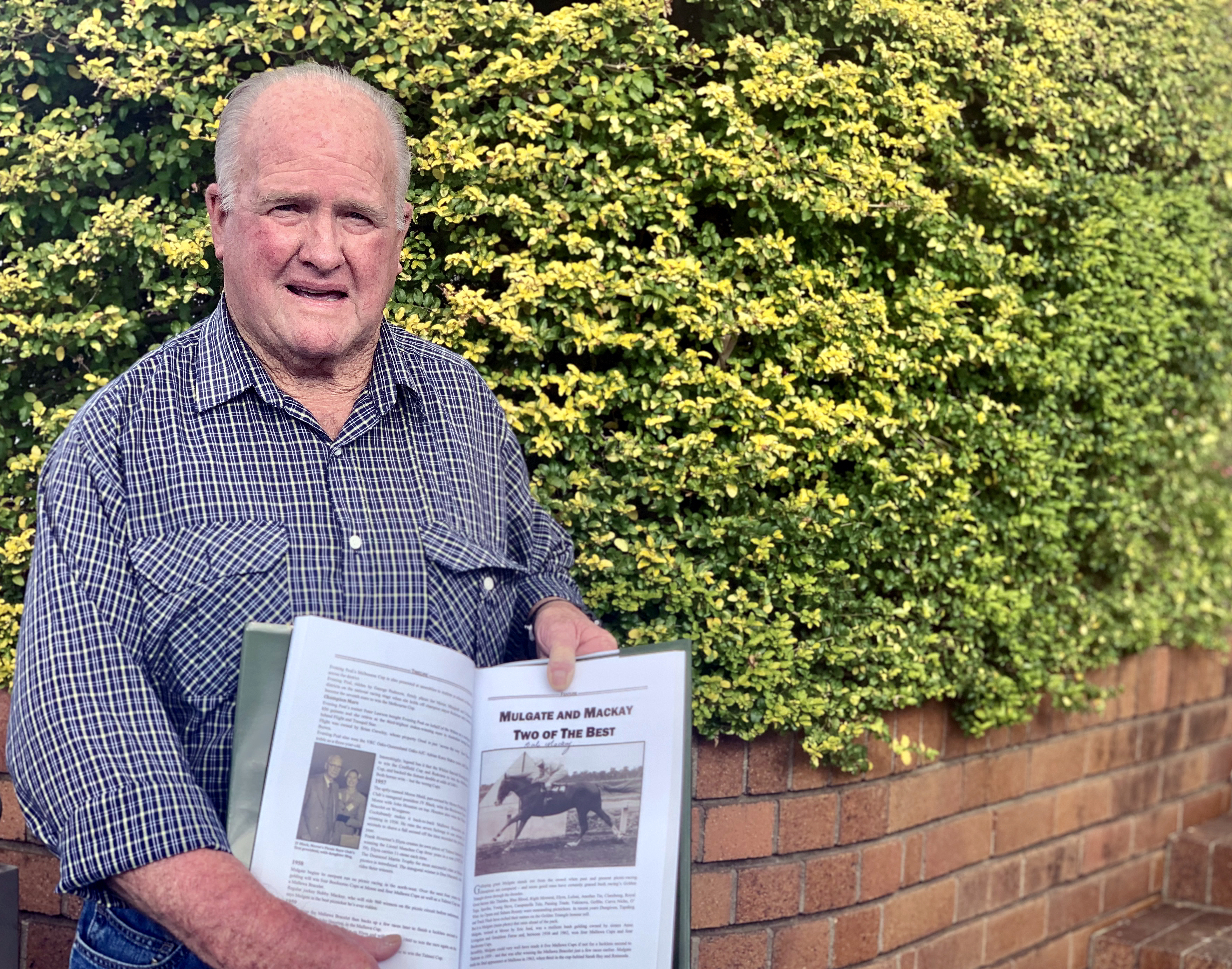 Bobby Mackay - was a professional among amateurs. Image by Aneeka McNamara

After all, he had his first race-day ride as well as his first winner at the Garah track back in the late 1950s.

“I had my first ride in the first race at Talmoi in 1956 and rode my first winner in the third race the same day for Eric Jurd– and only had the three rides at the meeting,” Mackay smiled. And from that moment on, there was no looking back.

Mackay completely dominated picnic meetings across northern NSW and southern Queensland for the next 22 years, riding 960 winners. He created records that still stand and over the years broke long-standing records – many of them his own.

During the 1960s, he rode 22 winners in the space of a week – an achievement documented in the Guinness Book of World Records. He also won the Desmond Martin Trophy at Moree for most successful rider 10 times between 1957 and 1973.

Mackay’s career is punctuated with good horses and big wins – but he says there was nothing quite like winning “in town”.

“Winning the Corinthian Handicap at Randwick on Top Missile was the biggest highlight, I suppose – that was in 1965 or ’66,” Mackay said. He also won the Corinthian at Newcastle on Havilah Bay and the Queensland equivalent at Eagle Farm with On the Wagon.

“When I won in Brisbane it was the richest Encourage race in Australia that day,” Mackay said. But creating records, or breaking them, was nothing new for Mackay.

One season he rode nine consecutive Cup winners at different tracks across the north and north-west and western districts. “I missed the 10th, and then won the 11th,” he laughed.

Mackay partnered Mulgate to an historic treble of Cup wins at Moree, Mallawa and Talmoi in 1961 and rates the Eric Jurd-trained gelding as the best picnicker he’s ridden.

“Mulgate was an exceptional horse – a very good weight carrier and very honest,” Mackay said. “He won a fair few races – and won them easily with big weights; he was a good, solid horse with a real good turn of foot.

“Another Tie was also a good horse and so was Calm Day, a terrific weight-carrier. I won the bracelet on him at Armidale with 13st 6lbs.”

The former great said winning all three cups on the Golden Triangle is no easy feat, adding the third leg at Garah was a tough ask around the tight Talmoi circuit. “You have to be up there (at Talmoi),” he said.

“There is a long straight and a lot of room at Moree, and Mallawa was modelled on the Randwick course, but it’s pretty tight around Talmoi – it’s a fair turn around the back until you get into the straight.”

Mackay repeated the coveted treble in 1973 on Passing Trade, owned by Henry Moses and Percy Stirton and again in 1976 on Yakinova for trainer Arthur Squires and owner Wallace Munro. On rare occasions, stewards permitted Mackay to ride at professional meetings, and he certainly showed that he was equal to the task.

“When horses got a lot of weight at the professionals, you could get permission to ride,” Mackay said. “I rode Scottish Crag one day at Tamworth when he had 11st. He won by a couple of lengths and went on to win the Ramornie Handicap at Grafton.

“He’s probably one of the best horses I’ve ridden, if not the best. He also won the Lightning handicap in Brisbane,” he said.

Mackay retired in the mid-1970s before making a brief comeback for one ride for Dr Geoff Abram in the Quirindi Picnic Cup. “Doc rang and pleaded that I come over and ride in the cup for him, so I started skipping and got fit and we won the cup by about half-a-length,” Mackay said.

“I rode at Coonabarabran the following weekend, but that was the end of it. I had a young family.” Geoff Farrar, whose late wife Geraldene part-owned Mulgate with her sister Anne, said Mackay was a rider right out of the box. “He was the professional amateur,” Farrar said.

“Bobby was the number one jockey in that era of racing,” Boland said. “He was revered on the picnic circuit and it didn’t matter where he went – he was ‘the one’,” he said.